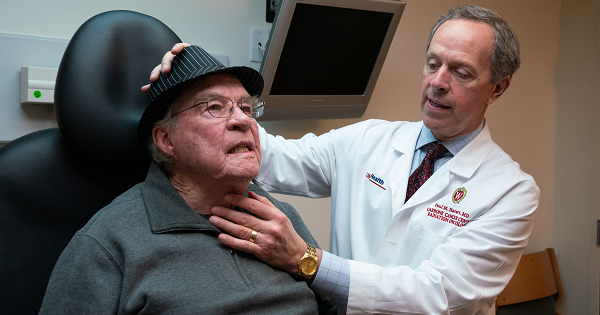 Decades of cigar smoking had given Tom Bodvig a cancerous tumor that covered much of his lower lip.

The initial treatment options weren’t appealing to him – either surgery to remove most of his lip or external beam radiation. But then his doctor in Freeport, Ill. suggested he travel to Madison to see if he’d be a candidate for brachytherapy.

"It was a far better choice for me,’’ says Bodvig, who celebrated his 81st birthday and has been cancer-free since his 12 days of treatment in 2011. "It wasn’t very painful, and I was really pleased with the result. You could not have had better results."

So why is brachytherapy thriving in Madison while in decline at many other cancer centers in the United States?

"The reputation, expertise and high volume of cases keeps our team of practitioners functioning at the top of their game,’’ says Dr. Paul Harari, who chairs the Department of Human Oncology and treated Bodvig with lip brachytherapy. "As a result, many providers around the region refer their patients to UW specifically for this established brachytherapy expertise and success rate."

Brachytherapy – pronounced brake – E therapy – allows doctors to target cancer with higher doses of radiation to a smaller part of the body. While methods vary depending on the cancer type, many patients, like Bodvig, will go home during treatment wearing a small catheter or tube used to direct a radioactive pellet about the size of a grain of rice right into the tumor.

"This offers many advantages to patients,’’ Harari says. "It is more targeted, so healthy tissue is spared, and it can also deliver a higher dose than external beam radiation. Sometimes it allows us to speed up the treatment time. And studies in certain tumor types like cervix cancer have shown that it can offer survival benefits of five to 10 percent over other treatments."

But for all the advantages, Harari calls brachytherapy is "a vanishing art’’ at many American cancer centers, a topic that the American Society of Radiation Oncology (ASTRO) called "alarming" in its most recent magazine, which devoted the entire issue to examining and illuminating efforts to reverse this trend.

ASTROnews found that while brachytherapy remains popular in Canada, United States cancer centers are tending to use this method less and less frequently. ASTRO found that 73.7 percent of academic practices perform less than 12 brachytherapy cases per year, and 24.8 percent perform only 13 to 53 cases per year.

Other conditions treated at UW range from complex skin cancers of the face and scalp to lung and bile duct cancers.

Harari says UW has a long tradition of brachytherapy excellence, dating back to trailblazer faculty member Dr. Dolores Buchler, who was trained in gynecologic oncology and radiation oncology. Expertise has been passed forward to subsequent faculty members and residents who train here.

In fact, Bodvig says his annual checkups with Harari are often teaching moments.

"He likes to invite all the interns in and explain about my case so they can learn from it," Bodvig says.

Reimbursement issues have also inhibited the growth of brachytherapy in the United States. Compensation has lagged considering the very high complexity and resources required and this has discouraged small- and medium-sized hospitals and radiation oncology clinics from building and equipping brachytherapy programs. Without dedicated operating suites, experienced physicists and physicians with years of experience, it is not easy or realistic to handle cases effectively.

Harari, who is also board chairman of ASTRO, is helping lead a national effort to train more residents and reduce the decline in brachytherapy.

"If there was a new cancer breakthrough that led to improved survival rates of 10 percent, it would be front-page news,’’ he says. "A gradual decline in provider expertise that reduces survival rates by the same amount should get the same level of attention and concern."