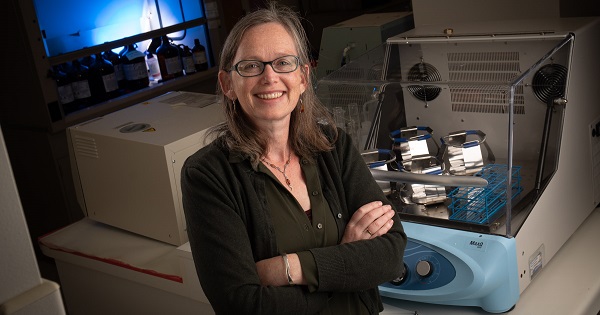 Rozalyn Anderson, PhD and her colleagues think they know the key to aging well: caloric restriction (CR), or eating around 20-25 percent fewer calories each day without giving up vital nutrients. Decades of studies of lab animals and more recent clinical studies in humans shows CR leads to a reduction in cancer, heart disease and many other aging-related diseases. Animals on CR also live longer.

The problem is, it is not very practical.

“Very few people would tolerate caloric restriction,” says Anderson, an associate professor of geriatrics in the UW School of Medicine and Public Health and a member of the UW Carbone Cancer Center. “Instead, I study long-lived animals on CR to try to understand how they resist developing aging-associated disease. The argument is that if we can harness those pathways that are responding to nutrition, we can use that as targets for pharmacological interventions.”

Recently, Anderson and her research group at the VA Hospital have refocused their research on cancer. In mouse models of cancer, mice on the CR protocol develop fewer spontaneous cancers. And, when researchers implant tumors, growth is slower in mice on CR.

“So we’ve got these really amazing anti-cancer effects of CR and no one really knows why that is,” Anderson says. “These tumors fail to thrive in the CR animals – CR somehow creates a non-permissive environment for tumor growth, and I think that’s a really interesting avenue of research.”

Anderson and her group’s current hypothesis is that CR both alters cell metabolism in a way that is both detrimental to cancer cell growth and puts the brakes on growth signals in the animal. To understand what is happening with CR at each level – from individual cells to the whole animal – her research group uses mouse and non-human primate models, and cultures animal cells in the lab.

“We take an observation in mice, let’s say, and then we can test it in cell culture through drugs or genetic manipulations to try to break down what is changing with those cellular pathways, and can we identify a mechanism to tweak?” Anderson says. “And then we go back and say, ‘Well, is this observation also true in the monkeys? Is there evidence for our observation playing a role in CR?’ So we ping-pong between the models to keep mechanisms in focus with potential for translation.”

Through continued research, Anderson and her group hope to better understand the ‘why’ behind CR’s health benefits. She said they have identified and begun testing drugs that appear to function as CR mimics in the lab, though they are not yet ready for human trials.

A more direct example of Anderson’s work is in a collaboration she recently began with UW Carbone urologist Tracy Downs, MD. Together, they are interested in identifying metabolism-based biomarkers in blood that identify elevated risk for prostate cancer, a condition linked to obesity in a way that is not fully understood. The long-term goal is to define new tools to improve outcomes for African American men that have higher incidence of prostate cancer and poorer prognosis.

“A blood-based biomarker will allow individual healthcare strategies to take metabolic status into consideration,” Anderson says. “Then, interventions, such as early or more frequent screening, or treatment programs for men who have the disease can be customized and designed accordingly.”