Longtime Drummer Gets His Rhythm Back at UW Health Rehabilitation Hospital

Longtime Drummer Gets His Rhythm Back at UW Health Rehabilitation Hospital

When brothers Jim and Mike Flickinger were kids growing up in Elgin, Ill., they'd rock so hard in their basement jam sessions that the kitchen table would rattle upstairs while their parents ate.

More than 50 years later, the brothers have never stopped jamming. Drums. Congas. Guitar. Bass. Piano. Mandolin. You name it, they've played it, with passion – for decades.

So when Jim started having trouble with his balance and coordination, the retired insurance agency owner worried that whatever was happening with his health might affect his ability to play the drums he had always loved so much.

"I finally got an MRI," Jim said. "The stuff they saw... they had deep concerns." 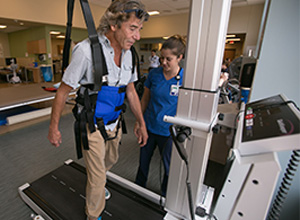 Doctors in Peoria discovered that three of Jim's vertebrae were pushing against his spinal cord. Something had to be done before he lost even more function.

"The next day, our good friend says, 'Man, you've got to go to Madison and see Dr. Resnick. That's the place where it happens,'" Jim said.

So the Flickinger brothers took their trusty Buick LeSabre on the 90-mile drive from their farm in Garden Prairie, Illinois, to Madison. At UW Health's University Hospital, neurosurgeon Daniel Resnick, MD, told Jim that he may need a laminectomy. The major surgical procedure involves cutting away the bones that had been putting pressure on Jim's nerves and spinal cord, causing him to frequently lose his balance and drop things.

"He knew how much playing drums meant to Jimmy," Mike Flickinger said. "So Dr. Resnick told him, 'When you can't hold your drumsticks, call me.'"

A week later, Jim was back in Madison having surgery. And then, with Jim in a cervical collar and unable yet to grasp anything in his hands, the Flickinger brothers took another drive – this time, in an ambulance to the UW Health Rehabilitation Hospital.

The Road to Recovery

There, at the brand new inpatient rehab facility that had just opened its doors on the east side of Madison, Jim's long healing journey began. And right away – perhaps a little to the chagrin of a couple of laid back guys who like to sleep in.

"My brother's a late sleeper, but they were getting him up at 7:30am and getting things going," Mike recalls.
"We got here, and the next day, they started therapy sessions – four to six sessions a day. Boy, they get you on a schedule, and you come to rely on it." 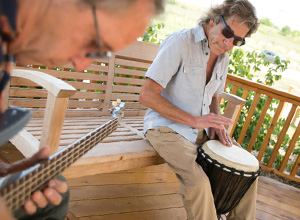 As UW Health Rehabilitation Hospital therapists Julie Przywara and Casey DiTroia began chatting with Jim during his therapy sessions, they quickly learned of the drummer's passion for music. And so they tested the acoustics in the bright new therapy gym, bouncing Bob Dylan off the expansive windows that look out on the gazebo outside.

"Man of Peace." "Neighborhood Bully." Pretty much all the tracks off Dylan's "Infidels" album. Day after day during his three-week stay, the music's beat helped Jim find his own rhythm during all those therapy sessions – whether he was working his way up to walking on the treadmill or helping his brain communicate with his hands again by threading pipe cleaners through drinking straws.

"We knew it would motivate him," Przywara, a UW Health Rehabilitation Hospital occupational therapist, said of incorporating music into Jim's sessions. "And using the beat really helped us work on his coordination and strength."

"You could actually see it as he got stronger – we could pick songs with a faster tempo as he walked on the treadmill," added DiTroia, Jim's physical therapist at the rehab hospital.

"Every single person involved here with us was unbelievably kind and diligent... We just knew everything was going to be alright."

"That was torture, but it was good torture," Jim recalled with a smile. "Man, it works. Rehab like this, at a place like this - it's equally as important as the surgery."

"It was the number one thing he wanted to get back to, so it was great to see him play again," Przywara said, adding that eventually, impromptu concerts would break out at the rehab hospital, with Jim on drums, Mike strumming his guitar, and another patient on harmonica.

Whatever the therapists threw at Jim, he was game.

"When he got here, he couldn't hold onto anything with his hands. But he never got frustrated," Przywara said. "He would just try his best – and he would help motivate other patients, too."

Getting Back to Life with Individualized Therapy

It's the sort of thing that happens a lot at the UW Health Rehabilitation Hospital, where doctors, nurses and therapists take a team approach with patients recovering from strokes, brain and spinal cord injuries, amputations and complex orthopedic injuries.

Patients – and their families and caregivers – are very much part of the team at the rehab hospital, where goals include helping patients restore basic life skills and the ability to perform daily tasks, whether that's doing the dishes or hitting the skins.

If you like to bake, therapists will work with you in the rehab hospital's adaptive kitchen, where patients can practice whipping up a batch of cookies, standing for longer periods of time, and getting the cookies into and out of the oven.

If you're missing your garden at home, therapists work with you so you can weed, water plants and help harvest in the rehab hospital's garden.

If you enjoy dancing with your spouse, therapists will spot you as you practice your ballroom moves in the therapy gym.

"It gets the families involved, too, which is really important in therapy and recovery," DiTroia said. "One patient was really into martial arts, so we took the mat out onto the floor and worked with him on his Taekwondo moves. It's a very patient-centered, individualized approach, where we focus on their interests and what motivates them."

The approach helps patients feel invested in their recovery, the Flickinger brothers say.

"The whole system here – it's all about healing," Jim said, noting that the entire UW Health Rehabilitation Hospital staff made the Flickingers feel welcome and supported - from the people cleaning Jim's room to the dining room staff who'd make him his special green smoothies every morning.

"People oftentimes don't get any credit for what they do. I mean, the maintenance people, the kitchen people, the CNAs – every single person involved here with us was unbelievably kind and diligent, and they were really into their jobs," Jim said. "We just knew everything was going to be alright." 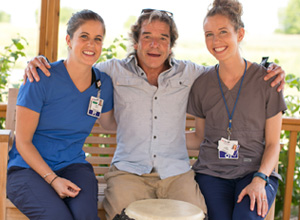 On a sunny afternoon in August, nine months after Jim's discharge, the Flickinger brothers again jumped in their LeSabre to drive up to Madison – this time, to visit old friends at the UW Health Rehabilitation Hospital.

"It's just so good to be here," Jim said as he walked with his brother into the lobby, surveying his one-time home from behind his blue Ray-Bans. Jim and Mike were looking forward to hitting The Cardinal Bar in downtown Madison later that evening to jam at an open jazz night.

But first, they were thrilled to be back at the place where Jim got back his rhythm – and much more.

And when the UW Health Rehabilitation Hospital celebrates its first anniversary later this month, the Flickinger brothers will return again – this time bringing their band, the Genoa Rhythm Kings, to perform for the staff and patients.

These days, Jim's playing a lot more jazz than rock, since he now needs to sit lower and closer to the drum set to accommodate his post-surgery neck and shoulders. But even if he's had to change his style, Jim was happy to take a bongo out onto the rehab hospital gazebo and show his therapists how far he's come.

"I can't stress enough how significant my stay here was. I don't even know how to say it," Jim said, trailing off as he searched for the words.

Always at his brother's side during Jim's recovery, Mike didn't miss a beat, fittingly chiming in with an affable assist: "How about this, Jimmy? 'This place and the people who work here are incredible!'" 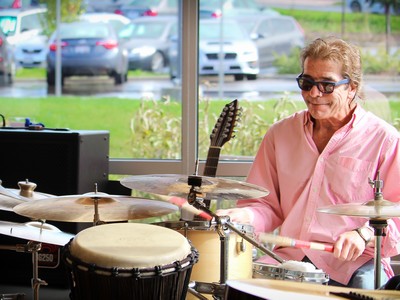 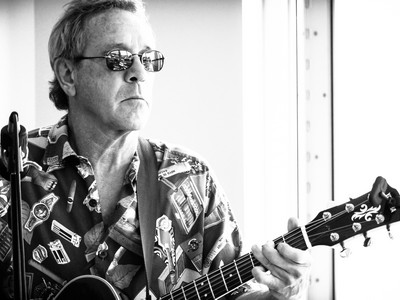 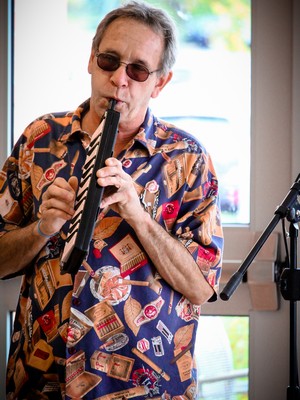 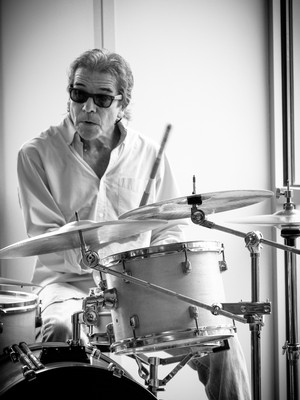