Reducing the Burden of Cancer in Communities That Need it Most

Reducing the Burden of Cancer in Communities That Need it Most

Madison, Wisconsin - The Cancer Health Disparities Initiative (CHDI) of the UW Carbone Cancer Center works with communities who experience a higher cancer burden in an effort to help them improve their health outcomes.

"We are committed to building partnerships with community-based organizations and individuals to help reduce health disparities, particularly cancer disparities," said Rick Strickland, CHDI director, of the program’s overall mission. "We want to support local communities in improving their own health and well-being through education, research and training."

CHDI works with many different communities affected by cancer disparities. In this piece, we will focus on CHDI’s Rural Cancer Disparities Project.

A Need to Bring Cancer Education to Rural Wisconsin Counties 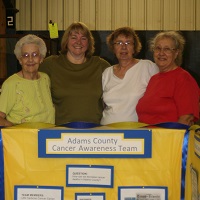 "It has been well-documented that rural populations experience an increased cancer burden compared to urban populations, due to factors such as later diagnosis, lower rates of health insurance, fewer providers per capita and greater distance to a provider," said Cody Fredrick, community health educator and current rural project coordinator.

The Rural Cancer Disparities Project was founded in 2011 when CHDI received a supplemental grant from the National Cancer Institute's Center to Reduce Cancer Health Disparities to conduct a two-year pilot study. Pilot study activities called for CHDI to work with local rural community partners to adapt, test, and implement a cancer education curriculum.

Rebecca Linskens, who initiated and continues to work with the project, began by analyzing health data of 16 counties in southern and central Wisconsin to identify counties experiencing cancer disparities. Following over 50 interviews in seven counties, Linskens asked Adams County representatives to host the pilot project.

"Rebecca and the Adams County Cancer Awareness Team (ACCAT) began with an existing evidence-based curriculum, 'Understanding Cancer,' from the Alaskan Native Tribal Health Consortium. The community decided that they wanted to focus on what cancer is and how to prevent and screen for it," Strickland said. "Rebecca's training in health literacy ensured that the materials could be understandable and accessible. The resulting curriculum is now known as Cancer Clear & Simple."

“Each facilitator has a basic outline to follow, but they can modify it for their audience," Fredrick said. "Each session includes discussion, videos and interactive activities such as demonstrating how cancer spreads and how to create your own healthy SMART goal."

Reducing cancer health disparities in any community takes time, but CHDI monitors the impact of CC&S over time by asking participants to fill out assessments.

"Some of the things people say after attending a program is they feel like they can talk about cancer, that there is less of a stigma attached to it or that they understand cancer terms that they didn’t before the session,” said Mary Ann Schilling, Family Living Educator with the Waushara County UW-Extension, and a lead trainer who was part of the team that developed CC&S in Adams County. “Participants are surprised at the impact a healthy diet and physical activity can have in decreasing cancer risk.”

Added Fredrick, "Pre- and post-tests have shown that the participants have increased cancer-related knowledge and that their intent to change behavior, such as drinking or smoking less, has increased.”

CC&S, which began as a small pilot project in one Wisconsin county, is rapidly expanding. Facilitators are now trained and leading sessions in Adams, Juneau and Waushara Counties. In partnership with UW-Extension, CC&S will now be offered to 33 additional rural counties through a Health & Safety Education grant from USDA’s National Food and Agriculture Institute. CHDI is also partnering with the Adams Columbia Electrical Coop and UW Carbone Cancer Center member Elizabeth Jacobs, MD to test shortened CC&S sessions in a "lunch-and-learn" format. In addition, CHDI has adapted CC&S for use with African American communities, and is currently translating it into Spanish.