From Puerto Rico to Madison: Treatment for a Rare Cancer

From Puerto Rico to Madison: Treatment for a Rare Cancer 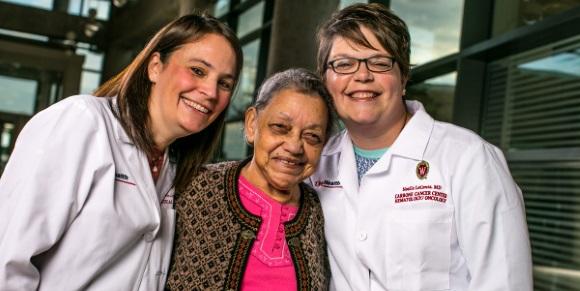 Cancer can be the best worst thing that hits a family.

Every patient's story is different, but here's how cancer brought Eloisa Torres Flores from the sunny Caribbean to chilly Wisconsin. And how her family's gratitude for the care she received at the UW Carbone Cancer Center has changed their lives.

The story begins back in the summer of 2009. Eloisa's son, Akeem Torres, was concerned about reports from his sister in Puerto Rico. Their mother was very ill, and doctors at the hospital in Mayaguez could not explain why she had turned yellow from jaundice and was losing blood and lots of weight from her petite frame.

Finally, his sister Esther in Puerto Rico discharged their mother from the hospital against the doctor's wishes and flew with her to Madison, where Akeem and another sister, Maribel, live. She went straight from Dane County Regional Airport to the University Hospital Emergency Room. And the news there was about as bad as it could be. A resident physician told the family that it was advanced pancreatic cancer and that keeping Eloisa comfortable was all that could be done.

The family, which includes five adult children and their partners and children, was devastated.

"We were crying and she was consoling us, telling us that it would be okay, that she was ready,'' Akeem remembers.

But then the door to the room opened, and, says Maribel, "It was like a superhero in a cape burst into the room."

Here's how Akeem remembers it: "She and the interpreter were in one corner of the room, and it was like she was only talking to mommy. She said, ‘I looked at your X-rays and I don't think it's pancreatic cancer. I think it's a rare kind of cancer. I can get it but you're going to have to promise me to fight really hard.' The two of them were holding hands, and looking into each other's eyes, and mommy looks at her and says, in English, ‘Take it out.' ''

Dr. Winslow was correct. Torres-Flores had ampullary cancer, which originates where the bile and pancreas ducts empty into the small intestine. To remove it, Winslow performed the Whipple procedure, a long and involved surgery that involves removing the head of the pancreas, the duodenum (the first piece of the small intestine), part of the bile duct , the surrounding lymph nodes, the gallbladder, and, sometimes, part of the stomach. Next the surgeon reconnects the remaining parts of the digestive system.

Torres-Flores spent more than a month in the hospital, recovering. Every night, one of her children stayed with her, with the daughters taking over care duties such as bathing.

Following her discharge, she went to live with son Akeem, who was in charge of feeding her via a feeding tube and a bag that hung from a pole.

"We called it her stripper pole,'' he says. "It went everywhere she went."

Not being able to eat was tough on a woman who takes pride in cooking such Puerto Rican specialties as pastelón, and arroz con gadules. Akeem says that when his mother was going to chemotherapy under the care of her medical oncologist, Dr. Noelle LoConte, she wanted to bring some home cooking to the clinic.

"She would say, 'Maybe I could bring her a little something,''' Akeem remembers.

Those months were a gift, he says, because he had only been seeing his mother once every two or three years when he would visit Puerto Rico. That winter, he was able to hear the stories of her childhood, and learn so much more about her family. He began writing the stories down, so they would be saved.

"It was a terrible experience,'' she says, "but it probably was the best thing that ever happened to our family, or to me."

In Maribel's case, the experience really did change her life.

"Up until then, I had been selfish, but I remember making a promise,'' she says. "If you (her mother) get through this, I will go back to school."

Maribel was so impressed with the UW Health interpreters who were with the family during the whole ordeal.

"I remember just watching the interaction with the interpreters, the level of empathy, how they know when it was time to hold a hand or provide a little support,'' she says. "It had to be so gratifying for them."

So she quit a good-paying job in accounts receivable, went back to Madison College, earned an associate's degree, and became a nationally certified medical interpreter. She's now working on a bachelor's degree online. 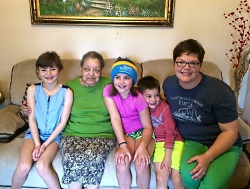 Today, she's a contract interpreter for UW Health, and works at outreach  events such as a free ophthalmology clinic for people without regular health care.

Eloisa, too, got a chance to give back. When Dr. LoConte and her family were vacationing in Puerto Rico, they stopped in to visit and Eloisa put on a spread of her famous fried plantains and other specialties.

These days, she visits Madison once a year, for medical checkups and to check in with the doctors and other UW Carbone Cancer Center staff who have become part of her Wisconsin family.

"These past seven years have been such a gift to us,'' says Maribel. "We got to tell her that we love her. Every time we have one of these moments with her, I think of her doctors. It all started with the care. We wouldn't have her without that."