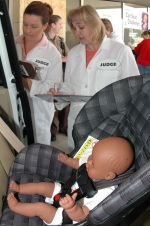 MADISON - Installing a child safety seat in a motor vehicle is not like changing a light bulb. There are a number of steps to follow to make sure the child is safe in case of a life-threatening accident.

Local television news anchors Kim Sveum, Amy Carlson and Sarah Kronenberg were judged by experts on their ability to install the seats properly. Points were awarded on the following criteria: correct direction and placement of the seat, correct angle, correct use of the seat belt and latch, and the snugness of the harness on the child. Sveum and Carlson tied for first.

Across the nation, better than 80 percent of car seats are incorrectly installed, according to Nan Peterson, senior clinical nurse and injury prevention specialist.

"Motor vehicle injuries are the leading cause of death among children," she said. "The good news is many of these deaths are preventable. Placing a child in an age and size-appropriate car seat reduces serious injuries and fatalities by 71 percent for infants and 54 percent for toddlers. We have a real good life-saving device that offers the best protection for children in the event of a crash."

During the event, Kohl's Department Stores presented the hospital with a check for $93,113 raised through the Kohl's Cares for Kids program to promote child safety awareness. The money was raised through sales of special merchandise including stuffed animals, children's books, and compact discs. Since 2001, American Family Children's Hospital has received $850,000 in donations from the store chain.

Car seats, bicycle helmets, and other safety devices for children are sold at the Kohl's Safety Center, which opened in the hospital in October 2007.

The Madison Police and Fire Departments and Dane County Sheriff's Office provided assistance during the car seat challenge. Representatives from Wisconsin AAA and the Dean Foundation served as judges. Vehicles were provided by Zimbrick Motors.