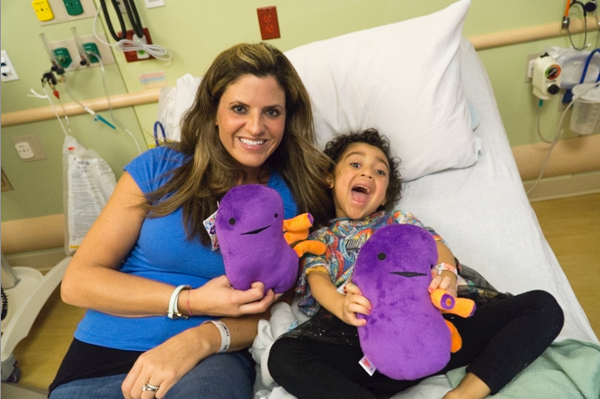 Madison, Wisconsin - When preschool teacher Beth Battista learned that Lyla Carreyn, a 5-year-old student at the same school, needed a kidney transplant, she said "I just knew I had to get tested."

In October, Beth and Dena were invited to appear on The Ellen DeGeneres Show, where Beth received a thank you video and gift package from Aaron Rodgers, her favorite Green Bay Packers player. (Watch video) They also shared with Ellen the need for more living donors. Beth, who is a registered organ, tissue and eye donor and also on the bone marrow registry, is focused on the good news that living donation creates.

"People like this very positive story," says Beth. "There's so much negativity in media right now that I think that's why our story went so viral so quickly."

So quickly, in fact, that Beth had to swiftly talk with her children, ages 6 and 8, about her plan to donate a kidney, before they heard about it from anyone else.

"They asked, 'Why you, mom?' " But, says Beth, "After I explained how sick Lyla was, and they met her and saw all of the machines and medications, they understood."

Beth has been fielding questions about living donation, and "talks about it a lot," she says. "My friends didn't know much about organ donation, so this has been a great way to educate more people."

"I always knew I was meant to be a wife and a mom and a teacher," says Beth. "This was just another calling. I wanted to give Lyla the future. A normal, happy, healthy future and I want anyone who has this same feeling to go in and get tested as a donor and give the gift of life."

Beth's parents set the example she's tried to follow, of always being generous and giving back. In the 1990s, Beth's uncle and godfather received a kidney, and Beth remembers how that changed his life. "Someone gave him 10 extra years, and I just wanted to give back," says Beth. "It was my turn."

If you would donate a kidney for someone, would you donate for anyone?

Stories like Beth and Lyla's draw a lot of media attention. Across the nation, patients, desperate parents, family and friends frequently use social media as a method to alert others to their situation, and those messages often result in dozens of offers to donate. One of those generous people may save the life of their intended recipient, but most will not consider the idea of donating to someone else on the waitlist.

While the thought that you might be the person to save a desperately ill child is enticing, new programs make it possible for just about anyone, regardless of blood type, to be a living donor to someone in need. At UW Health, potential living kidney donors can consider many donation options. Some, like an internal paired kidney exchange, take UW Health donors and their intended recipients and 'swap,' the donors and recipients to find the best matches for each recipient. Other programs, such as the National Kidney Registry, and a similar program managed through the United Network for Organ Sharing, do the same but with donors and recipients from across the nation. Often, these exchanges are initiated by a humanitarian or non-directed donor, someone who wishes to donate to anyone in need.

Almost 100,000 people in the U.S. are waiting for a kidney, and wait times can be lengthy, resulting in dialysis and other serious complications associated with kidney failure. Recipients of organs from a living donor have better outcomes for a longer period of time than those who wait for a deceased donor. Living donors not only save the life of their recipient, but reduce the number of people on the deceased donor waiting list.