Treating Plantar Fasciitis Before it Becomes a Persistent Problem

Treating Plantar Fasciitis Before it Becomes a Persistent Problem 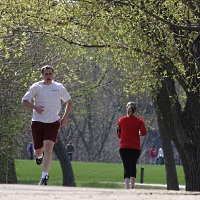 Madison, Wisconsin - There is a certain logic to severe sports injuries. A basketball player places too much pressure on his knee while cutting to the hoop, and his ACL ruptures. A soccer player is taken out by an aggressive slide tackle, and her ankle snaps.

The pain is real and the frustration palpable, but the cause-effect nature of the injury agrees with our desire to make logical an often-chaotic world.

That might not be the case with an injury such as plantar fasciitis. This inflammation of the tissue at the bottom of the foot that connects the heel to the toes often occurs as a result of basic sports participation and training, and sometimes just by standing for prologed periods or walking around.

"Rarely is it the result of traumatic injury," says UW Health physical therapist Bill Boissonnault. "It's difficult for many people to say, 'This is what caused it.'"

And the problem can stem from something beyond a person's control - questionable physiological design.

"Mechanically, it probably was not the most well-designed structure," says Lori Thein Brody, also a physical therapist with UW Health. "It starts at a fairly small, single point back on your heel and fans out to your five toes. Down at the toe end, the load is dispersed over a large area, but back at your heel, it's localized in one small spot."

If plantar fasciitis isn't as satisfying - or sexy, really - as more "serious" injuries, the sharp pain in the heel isn't any less bothersome, and the weeks and months during which it interrupts training and play doesn't pass any more quickly or pleasantly than the rehab corresponding to ACL tears and broke ankles.

"It can cause big problems," says Boissonnault.

Those problems surface in the morning. Athletes suffering from plantar fasciitis will feel its sharp prick with their first few steps out of bed. As the body warms to movement, the pain may recede, but it likely will return later in the day.

"It gets a little better as the day goes on," Boissonnault says, "but the more you're on your feet, the more it hurts."

That pain stems from swelling of plantar fascia tissue under too much duress.

"It comes down to the load on the tissue," Thein Brody says. "It's a mechanically-based issue."

The load problems vary by person. They may come from the pounding incurred during marathon training or merely from standing for long periods at work. The different causes of plantar fasciitis aren't as important as accurate diagnosis and response.

"The key is early treatment and resolution of the symptoms," Boissonnault says.

"You should see someone early," Thein Brody says, "so they can intervene before it does develop into a chronic phase."

Rest, ice and stretches that focus on the Achilles tendon and plantar fascia can help reduce the pain, as can anti-inflammatory medications like ibuprofen. But relief may be temporary if plantar fasciits is the result of structural problems, so Thein Brody and Boissonnault both recommend seeing a physical therapist to evaluate the source, not merely the cause, of the pain.

"It's not necessarily just a foot problem," Thein Brody says, adding that physical therapists will be, "looking at the (person's) mechanics from stem to stern. Sometimes we see weakness around the hip that's causing poor alignment all the way down to the foot, so we need to correct weakness at the hip. Sometimes it's a foot mechanical problem, where they are rolling to the inside of their foot. Then we might use an orthotic."

"We're trying to figure out why this started and what can we do to prevent this from coming back again," says Boissonnault. "There are two phases to the rehab program. Get it under control, symptom-wise, and then figure out, 'Why did it start in the first place?'"

For runners in particular, plantar fasciitis in only one foot can signal a problem that extends beyond the heel.

"If you're running on both feet, why are you having symptoms in one foot?" Thein Brody asks. "That's where the physical therapist really has to take a close look to see if there's a leg length discrepancy, if there's a pelvic obliquity, or tilt, that needs to be addressed."

A more holistic approach to care can identify these issues and correct them before plantar fasciitis progresses from a temporary nuisance to a chronic medical issue.

"The good physical therapist will sit down with that person and look at them from head to toe, examine their gait, examine their posture, look at their flexibility, look at their strength, talk to them about training and figure out where the problems are," Thein Brody says. "Often times, it's a combination of factors."