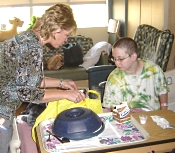 MADISON - Mazomanie's Joleen Adkins got involved in delivering pillowcases to young patients at American Family Children's Hospital at the behest of a friend whose son was battling cancer.
Lisa Rowell lives in Georgia, where her son was being treated, but during a visit to Wisconsin in July she mentioned the ConKerr Cancer project to Jolene as a way to help patients in pediatric oncology units in the area.
Since that visit Joleen has delivered 280 pillowcases to American Family Children's Hospital, including the latest load, which she dropped off Monday.
"The goal is to try to visit all the hospitals where there are kids in need, to try to brighten their days," Jolene says.
ConKerr Cancer is a nationwide initiative with a simple mission - to add a little color and flair to the lives of young cancer patients by giving them donated pillowcases. The project was started by Cindy Kerr, the Pennsylvania mother whose son Ryan was diagnosed with a rare form of cancer in 2002.
Word of Cindy's stitchery spread through Children's Hospital of Philadelphia, and soon she was making pillowcases for other patients, as well. Since then a veritable empire of fabric has erupted - 53 chapters representing thousand of volunteers have delivered nearly 50,000 pillowcases to children's hospitals and hospices in the United States, Canada and South Africa.
Locally, the sources are as varied as the pillowcase patterns.
"I've had Girl Scout groups, schools have been involved," Jolene says. "They come from quilt stores in the area and say, 'I have pillowcases for you.'"
Anyone interested in donating pillowcases may contact Jolene by e-mail at cases4lovewi@yahoo.com. Area pillowcase dropoff stations include Curves in Sauk City, Mill House in Waunakee, Country Sampler in Spring Green, Stitchers Crossing in Madison and Quintessential Quilts in Reedsburg.