The Importance of Philanthropy to Cancer Research

The Importance of Philanthropy to Cancer Research 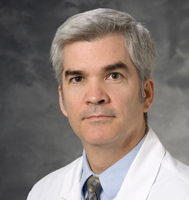 Madison, Wisconsin - "Why should I donate? It's not like my $100 is going to cure cancer."

Dr. Howard Bailey can understand the sentiment occasionally voiced by people considering a donation to the UW Carbone Cancer Center, but he disagrees with its implication.

"We view it as an investment," says Dr. Bailey, the center's director and a medical oncologist specializing in gynecologic and soft-tissue cancers and cancer prevention who came to Madison as a fellow under the very same Paul Carbone who lends his name to the cancer center. "We want to show to the community that, not only does their investment lead to important research, from basic research to clinical research to population research to outcomes research, but that research also usually leads to other funding."

The Cancer Center also leads research sponsored by federal organizations such as the Department of Defense, the National Institutes of Health and the National Science Foundation.

The dollars involved in these studies can be dizzying - in the hundreds of thousands and even millions of dollars. But Dr. Bailey says the key to securing funding for the larger research studies can often be traced back to more modest donations.

"One dollar will lead to 20 dollars from the NIH, from the Department of Defense, from industry clinical trials," he says. "We want to make sure we build it up and get the most value out of it. We always ask, 'How do we invest that philanthropic donation in a way that leads to many other things?'"

Years ago Dr. Bailey's own research benefited from such a multiplier effect. The Cancer Center directed philanthropic funds to his research in cancer prevention.

"That led to us to being one of the few organizations in the country designated by the NCI to develop new preventive agents," he says. "That's turned into $12 million in grants over eight years."

UW Carbone Cancer Center also extracts maximum value from philanthropy by directing every dollar to the people who are leading important cancer investigations - the researchers.

"All the philanthropy money goes straight to researchers and research," Dr. Bailey says. "It goes into helping support or hire new researchers, or funding a specific project."

Those research projects are not embarked upon, and those new researchers are not hired, without the generosity of individual and group philanthropic donations. Dr. Bailey estimates that philanthropy accounts for 90 percent of all research investments at the Carbone Cancer Center's research work, and it's integral to its lofty future goals.

"Cancer is unfortunately ubiquitous. We're all affected by it," Dr. Bailey says. "We want to expand what we do, to do more research and get into all cancer types, and the only way we're going to be able to do it is with philanthropy."

The discoveries derived from the Cancer Center's research, Dr. Bailey insists, will benefit not only its current and future patients but will proliferate throughout the state.

"We have faculty and staff who are deeply committed," he says. "We want to use more of our funding to be the center that helps people throughout the state. "We want to be truly the University of Wisconsin cancer center."