This article is an expanded version of the cover story in the print "Our UW Health" newsletter, spring/summer 2014 edition.

There are 19 steps inside the stairwell at the UW Health Rehabilitation Clinic in Middleton, Wisconsin.

A child could zip up and down those stairs in a flash, without a second thought. But for Mark Friend, every step up and down is a calculated process, as he learns how to manipulate - and more importantly, trust - his state-of-the-art prosthetic leg.

The prosthetic knee has a microprocessor in it, one that bends and helps slow the speed of his body as it lowers.

"Once that goes, you've got to trust yourself to go to the next step," says Friend, who has to pull his leg back to trigger the process.

It's a complicated system, one that requires a lot of thought and everything going right to have success.

The same could be said of the sequence of events that allowed Friend to survive a nearly fatal accident on January 5, 2013.

While working collecting garbage and recycling on a cold morning near Stoughton, a car hit Friend, pinning him between the vehicle and the back of his truck.

Friend only remembers bits and pieces and says "I do remember asking the driver to move the car - she was unable to."

That was the first thing that went right. Experts told Friend that if the car had been moved, he likely would have bled to death. Stoughton Fire and EMS responded to the accident and contacted UW Med Flight, which brought a physician to the scene, and then rushed Friend to UW Hospital and Clinics, a Level I Trauma Center.

Once at UW Hospital and Clinics, his vital signs disappeared. Friend didn't have a pulse when he got to UW Health trauma surgeon Suresh Agarwal, MD. He and his team were able to resuscitate Friend and then amputated most of his left leg to stop the massive bleeding. Friend said he was given 63 units of blood; the human body only holds 10 to 12 units at a time.

"We were surprised to get him out of the OR," Agarwal says. "An entire team took care of him and got him through this injury - which should have been fatal."

"He had the foresight to think about how much of Friend's leg was needed for a prosthetic limb," Paulios says. "He was thinking that far ahead on Mark's behalf, which I find to be phenomenal." 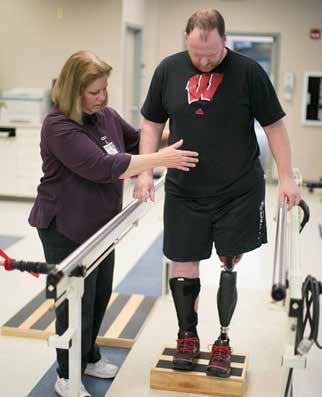 Friend also suffered serious injuries to his right leg and underwent major reconstructive knee surgery. Twice a week since May 2013, Friend has made the trip to see physical therapist Sandy Grady, who has helped him learn to walk with his prosthetic leg.

During a physical therapy session, Friend cracks jokes and comments on his attitude toward his challenges.

"Why get mad about it? You can't change it," he says. "Most people are going to get depressed and get angry and stuff like that. But I look at it more as, how can I be an influence? One of my main goals is to teach my kids as they grow up that there's no such thing as 'I can't.' Why? Why can't you? I'm missing a leg and I can. Why can't you? There's no excuse. I want to hear, 'I'll try,' not 'I can't.'"

During a conversation with one of his doctors, Friend says he was told that about 125 people were involved in saving his life. "Think about that – 125 people," he says.

Friend doesn't have to look far to remember them. He had fabric patches from UW Med Flight, UW Hospital and Clinics and Stoughton Fire and EMS embedded into his prosthetic leg, along with one of Bucky Badger.

"I just think you should give credit where it is due," Friend says. "If it weren't for them..."