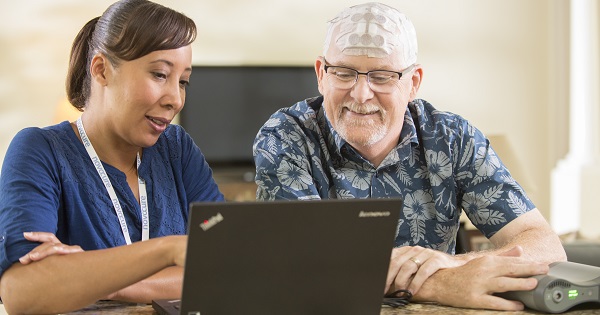 While the most common type of brain cancer, glioblastoma (GBM), remains a devastating diagnosis, a treatment delivered via a cap of electrical arrays is adding months and sometimes years to the lives of Carbone Cancer Center patients with GBM.

Dr. Ian Robins, a UW Carbone oncologist who specializes in brain cancers, says that research is showing improved survival by patients who wear the Optune device, and have it actively working, at least 18 hours a day, along with the standard treatment of surgery, chemotherapy and radiation.

"This is a very valuable addition to that standard therapy," Robins says. "We are even starting to see some long-term survivors."

Overall, the prognosis for GBM remains poor, with median survival of about 15 months. About 25 percent of patients are alive two years after diagnosis and 5 percent alive after five years. But among Optune device users, 13 percent were alive after five years, according to a study of 695 patients published in the Journal of the American Medical Society in December 2017.

"There are a minority of patients whose possibility of getting out beyond five years is doubled or tripled, but it’s still a small number," says Robins. "The majority will have a marked increase in survival, measuring more than a year."

That’s good news for a cancer that is difficult to tame because it keeps coming back after treatment. About 12,500 Americans a year are diagnosed with GBM. Usually, they begin treatment with brain surgery, followed by chemo and radiation.

Optune works to stop the cancer from returning by hitting the cancer cells with a low-intensity electrical field tuned to between microwave and ultrasound frequencies. The alternating electricity (called tumor-treating fields or TTF) disrupts the ability of the fast-growing cancer cells to divide and multiply but doesn’t harm the slow-growing normal brain cells.

"They discovered that if you can set up an alternating electrical field, you can disrupt cancer cells as they begin to divide," Robins explained.

Robins and brain-tumor nurse Lori Hayes were certified to prescribe the device in January 2013, shortly after it was approved by the FDA for patients whose GBM had returned. The FDA has since broadened the approval to newly diagnosed patients.

"There are no side effects except for skin irritation and Lori has pioneered techniques to help with that," Robins says. Robins was part of a UW Carbone team that published research showing that the device does not cause problems during radiation treatment.

An MRI of the patient’s brain guides where the arrays are placed on the scalp, in strategic positions based on the mapped image of the cancer. The arrays are coated with hydrogel and connected to a power source, which the patient carries in a backpack or purse.

"The patient has to maintain these arrays and an electrical current pretty consistently, with short breaks for showers and MRIs," Robins explains. "The longer current is on, the more efficacious it is."

"It is a family commitment, because the patient is not able to apply the arrays themselves," Hayes explained, adding that they ideally need to be worn 24/7.

But Robins adds, "In our experience, every patient who has made the commitment has followed through on it."

In May 2019, the FDA approved the same technology for treating metastatic, malignant pleural mesothelioma, a cancer of the lining of the lung. In that treatment, patches containing the arrays are affixed to the chest and back.

The TTF technology is now being tested for a variety of other cancers. UW Carbone is part of a trial using the technology for lung cancer and will soon open TTF trials for pancreatic cancer and brain metastases that started as ovarian cancer.

"When I first heard of it, I considered it to be witchcraft," says Robins, who has published several studies of technology. "It wasn’t until data started pouring in that I was convinced that this was useful therapy for the treatment of brain tumors."