One of Our Best Graduates Returns to UW

One of Our Best Graduates Returns to UW 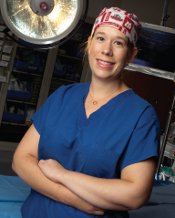 Madison, Wisconsin - Dr. Sara Best recently joined UW Health's Department of Urology after completing a fellowship in Endourology and Minimally Invasive Urology at the University of Texas-Southwestern in Dallas.

Best is a graduate of the University of Wisconsin Urology Residency Program. Prior to residency, she earned a Bachelor of Science in Genetics from UW, earned her MD from the UW School of Medicine and Public Health, and completed an Endourology Research Fellowship at the University of Minnesota.

"More and more frequently, kidney cancer is detected in early stages, often incidentally through a CT scan performed for another condition," Best said. "Historically, small renal masses were treated by removing the entire kidney. Today, many of these cancers can be treated by nephron-sparing partial nephrectomy. Removing the mass, rather than the entire kidney, helps preserve renal function."

In addition to the traditional open partial nephrectomy, there are minimally invasive options for many patients.

The hand-assisted laparoscopic partial nephrectomy allows for smaller incisions and faster recovery time. In the past five years, some medical centers - including UW - have started to offer the robot-assisted laparoscopic partial nephrectomy. This operation allows smaller incisions than the hand-assisted surgery, while providing three-dimensional images to the surgeon and mimicking the articulation of the human wrist.

Best notes that these advantages can sometimes allow the surgeon to reconstruct the kidney more quickly, reducing the time that the blood supply is clamped-off from the kidney.

For example, pyeloplasty surgery for ureteropelvic junction obstruction (UPJO) can be performed with the surgical robot. Along with her extensive training in laparoscopy and robotic surgery, Best is well-versed in the latest endourologic approaches to treatment of stones and other diseases of the genitourinary tract.

Best is also a researcher with a focus on optics technology.

She plans to collaborate with other physician scientists at UW on a hyper-spectral imaging system. With this technology, a highly sensitive camera shines a light on tissue of interest and analyzes the spectrum of light that bounces back. The camera is capable of detecting spectral signatures of different molecules, such as measuring hemoglobin oxygenation in the kidney before, during and after renal surgery.

In the clinical setting, surgeons could modify their operative approach based on this information. The system could also be used in the research setting to measure oxygenation of the kidney in an animal model under various levels of minimal blood flow to the kidney. Similarly, an animal model could be utilized to test the effects of various medications on renal oxygenation.

Best is pleased to join the UW, a place where she completed much of her medical training and where she will bring the latest developments in urologic care to patients in our region.

"Technology has advanced such that we are now able to provide excellent outcomes for patients while helping them recover quickly and get back to their normal lives," she said. "I'm excited to come to work every day."