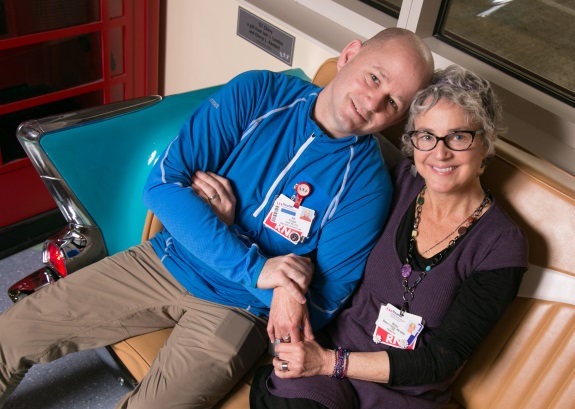 In January 1985, Betsy Bazur-Leidy, a new nursing graduate, started her career at UW Children's Hospital. Three months later, she had her first opportunity to serve as one of the primary nurses for an 11-year old cancer patient who had just been diagnosed with leukemia.

"Had this patient been admitted in January, I would've had a different mindset," says Bazur-Leidy. "I think the timing coincided with the point when I was ready to take some ownership of a patient and feel like I could be a primary nurse to somebody who was going to be hospitalized for a while."

The patient, Bill Yerges, stayed in the hospital from March to July that year, enduring intensive chemotherapy and radiation treatments and, eventually, a bone marrow transplant. During this challenging time, he and his family established strong bonds and friendships with the nursing staff, including Bazur-Leidy. 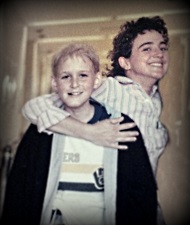 "He was quite the prankster and that immediately drew me to him," states Bazur-Leidy. "But I could see something so gentle underneath it all – a little boy inside all the other stuff. I connected with that and got along with his family really well."

Many years later, while attending a going away party for a coworker, Bazur-Leidy was introduced to April Yerges, another nurse who was described as someone she should know and would really like.

"I thought that was such a nice thing to say," states Bazur-Leidy. "I told her I took care of a young patient years ago with the same last name. April said, ‘That's my husband, Bill,' and I couldn't believe it."

Bill Yerges then walked up—both he and Betsy recognizing each other instantly—and they hugged. During their reunion, Bazur-Leidy learned that Yerges himself had become a nurse.

"Someone either chooses nursing because they don't know what they don't know and they're about to find out, or they do know because of a positive experience and the seed was planted long ago and it took some time to come to fruition, like Bill," states Bazur-Leidy. "I hope I helped plant that seed in some way because today, he's awesome with his patients. They all love him."

"I attended school for music and animal husbandry before I pursued nursing," he states. "I really don't know specifically what brought me to nursing, but I think my background and own experience led me back to this place. I've always enjoyed an emotional interaction and vulnerable people tend to be more open to something new or something that's bigger than what they're dealing with. The experience of reaching out to others and helping them through the road to recovery or wellness really became a passion." 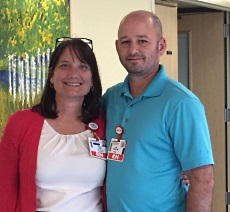 As one would expect, Yerges puts his former patient experience to good use in his current practice.

"I think I have a little more sympathy and empathy for kids and I think it puts me in a position to challenge patients to do things they might not have thought they could do, or overcome challenges of their diagnosis that they didn't think they could overcome," states Yerges. "Children are resilient and they're going to overcome things. When they do that, I think I connect with that and try to give them opportunities early on and say, ‘This is not a barrier for you or us – it doesn't change who we are or your inner person – it's going to be a bump in the road and we're going to deal with it.'"

"Bill has this beautiful combination of empathy and ‘pick yourself up by the bootstraps,'" states Bazur-Leidy. "It's an extraordinary recipe. He lets his patients have a bad day and tells them that tomorrow, they're going to turn it around together and he's going to help them figure it out. That's a real gift."

When asked why nursing is so special, Bazur-Leidy reflects back on a game she recently played with friends where everyone had to choose another profession.

"When it was my turn I said that I don't identify nursing as a profession," she states. " I am a nurse. It's just who I am and how I identify myself."

For Yerges, passion is at the core of everything.

"Nursing encompasses so much—compassion, a high degree of education and science that you have to be able to apply, and teaching. You spend your day educating, sympathizing, healing, counseling and entertaining. It's who you are and it's also what you do. It's passion that keeps growing and learning that never stops."

Yerges and Bazur-Leidy continue to be great friends who currently practice at American Family Children's Hospital along with Yerge's wife, April. And their bond has even expanded to the next generation.

"My daughter is also a nurse here and she told me that one day, ‘This guy practically tackled me in the hallway,'" laughs Bazur-Leidy, referring to the first time Bill ran into her daughter. "She and Bill became fast friends and now he teaches her. Talk about beyond full circle!"

After 14 years as a pediatric nurse and care team leader at American Family Children’s Hospital, Bill Yerges took on a new challenge in 2018, becoming a Transplant Coordinator with UW Health – one of the nation’s leading transplant programs. In this role, Bill collaborates with members of the transplant program to provide patient care for individuals who may need a solid organ (kidney and pancreas) transplant or have received a transplant. He continues to provide pediatric care, by assisting in the transplant coordinator for pediatric kidney transplant patients, interacting with Transplant surgeons, UW Health physicians, fellow nurses, patients and family members.