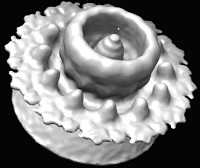 Give most kids a basic microscope and a leaf or a drop of pond water, and they are in awe of the, well, microscopic patterns and organisms they can now see. Give a cell biologist a transmission electron microscope (TEM), and they can understand how structures within cells are organized – and how changes in the structures contribute to diseases.

Now, thanks to the efforts of several University of Wisconsin–Madison researchers that landed $1.3M in funding from the Howard Hughes Medical Institute (HHMI), scientists on campus will soon have a cutting-edge new TEM. It will improve an older version of the technology currently housed on campus that lacks some of the new features that are helping to revolutionize electron microscopy. The microscope is supported by matching efforts from several campus partners, including Garding Against Cancer.

“What we were missing was more capability for 3D TEM for imaging tissues or organs, which for biomedical research is essential to understand the cellular basis of disease,” explains Marisa Otegui, UW-Madison professor of botany and genetics who led the charge to acquire the funds for the new microscope.

Learn how UW Men's basketball coach Greg Gard and his wife Michelle are working with Badgers across the state to advance cancer research in Wisconsin.

For example, the UW Carbone Cancer Center’s associate director for basic sciences, Paul Ahlquist, uses TEM to study a class of viruses that includes the cancer-associated virus, hepatitis C. When hepatitis C infects liver cells, it replicates within them to produce more and more copies of itself. If left unchecked, viral replication will continue for many years, leading to progressive liver damage and then liver cancer. Worldwide, liver cancer is the third-leading cause of cancer deaths in men. In the US, hepatitis C is the leading cause of liver cancer.

“It is of great interest to understand that replication process and how to disrupt it, and we’ve used TEM techniques to reveal major aspects of how viruses in this class reorganize the cell to accomplish that replication,” says Ahlquist, an investigator with both HHMI and the Morgridge Institute for Research. “Of course, many other aspects of cell biology and structure are manipulated by diverse tumors, so this new microscope will be extremely valuable for addressing many cancer biology research questions.”

The benefits of improving TEM technology to boost cancer research (as well as that of many other research fields) were clear, but the $1.3 million price tag for a new microscope was more than any individual lab on campus could afford. This is where HHMI comes in. The organization recently announced funding for “transformative technologies,” for which any of its members could apply and use toward purchasing cutting-edge instrumentation.

Two other HHMI investigators on campus – neuroscience professor Ed Chapman and Morgridge Investigator Phil Newmark – along with Ahlquist, wanted to apply for the funds. They approached their colleagues to define the most useful direction.

“Ed asked a group of people on campus: ‘What do we want to request? What instrument will be a game changer for our labs and for campus?’ And we decided to request a new 3D TEM,” Otegui recalls. “Ed, Phil and Paul agreed to support the instrument that the group has identified as our priority. It was such a generous way to recognize not only what they needed individually but also what the campus needs.”

Crucial to securing the funding from HHMI was an additional $700,000 in contributions from campus partners to cover the installation and upkeep of the microscope. UW Carbone was one of seven groups on campus to step up, and those funds were generously provided through Garding Against Cancer.

“HHMI only selected those proposals that had very strong support from the institutions; without that money, we wouldn’t have the HHMI funding,” Otegui says.