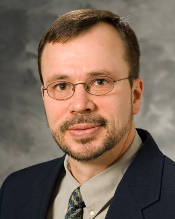 When it comes to fighting cancer, the tumor is generally seen as the enemy and the strategy is often to attack it by any means necessary.

So what if the tumor could effectively be weaponized against itself?

That's what Mark Albertini, MD, and researchers at the UW Carbone Cancer Center will try and find out in a new clinical trial for patients with advanced melanoma or skin cancer, a disease that's historically been difficult to treat.

In the past, oncologists have turned to many different forms of chemotherapy, though Albertini says none have ever worked well for advanced melanoma patients. "For so many years, we had essentially no treatments that were impacting outcome," he said. "Average survival, once metastatic, was less than a year."

However, in just the last 10 years, researchers have made incredible advances in immunotherapy, which works to amplify the body's own disease fighting powers. That starts with an increased understanding of how T cells work. This subset of white blood cells has the power to kill cancer cells, but they sometimes need a little help to do their job.

Immune checkpoint inhibitor therapies can do just that. These are treatments that can help maximize the potential of T cells to fight cancer, and are relied upon to treat today's advanced melanoma patients.

It's that foundation which Albertini hopes to build upon. "The knowledge that T cells can work and the understanding of ways to unleash that potential sets the stage for how can we make this better," he said, noting that there are still far too many melanoma patients who aren't seeing results from immunotherapy.

As good as they are, immune checkpoint inhibitors are not perfect. Albertini compares the therapy to cutting the brakes on a car that's sitting on the top of a hill with a target waiting for it at the bottom. In a perfect world, the car (a T cell) would coast down the hill and hit the target (cancer) with ease. However, things like fire hydrants, houses and people out for a stroll - collateral cells, if you will - tend to get in the way. Now, add a few more cars to the equation and you can see the problem.

"The knowledge that T cells can work and the understanding of ways to unleash that potential sets the stage for how can we make this better." – Mark Albertini, MD

"What we need are better ways to have the cars directed against the target, and specifically, ways to get the tumor to more potently start that response or augment that initial response," Albertini said.

To do that, Carbone researchers will inject an immunocytokine (IC) directly into a patient's tumor. The idea is to convert the injected tumor into an effective in situ or "in place" tumor vaccine, thus stimulating the immune system to help alert the T cells to the cancer's presence and attacking it. Along with radiation to the tumor being injected, this method has shown impressive results in pre-clinical testing on mice in studies designed by UW Carbone physician-scientist Zachary Morris, MD, PhD.

While other vaccines for advanced melanoma have been developed in the past, they've typically used certain molecules or even DNA. "The problem is, with any of those strategies, you're preconceiving what is most important to cause a response against the tumor," Albertini said. "But when you think about it, there's really nothing better than having the tumor serve as its own vaccine. If you can have the tumor presented in a fashion where it can be stimulating that immune response, you don't need to know which of the specific markers or molecules or antigens are important."

The study opened in September and is currently seeking participants. Among other criteria, eligible patients must have advanced melanoma, have received at least one FDA approved immunotherapy treatment and have a nodule by the skin surface that is 1-5cm in diameter.

Patients will be sequentially enrolled into one of four groups, with the first group receiving just the IC treatment. The other groups will all receive the IC treatment, with the second group adding in radiation, the third group adding radiation and nivolumab (one medication used for treating melanoma), and the fourth group including the IC treatment, radiation, nivolumab, as well as ipilmumab (another immunotherapy often used in conjunction with nivolumab). The idea is to figure out if the combination of treatments work well, as well as determine a safe vaccine dosage and identify possible side effects.

UW Carbone researcher Paul Sondel, MD, PhD, is the principal investigator of the National Cancer Institute grant that supports this program of research.

Even though this is a phase I/II study - meaning it's the first time this treatment has been tested in humans - Albertini says he's hopeful that the trial can yield positive results for patients.

"This is one approach that has a solid scientific foundation," Albertini said. "That paradigm has really worked in the past, we hope it will work here."

For more information on this trial, please contact Cancer Connect at 800-622-8922 or submit an online inquiry.