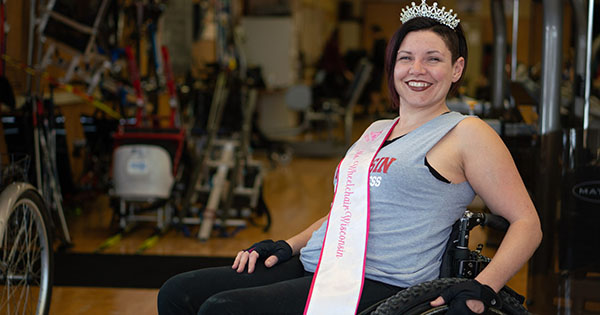 When Ms. Wheelchair Wisconsin reaches up to adjust her tiara, you might catch a glimpse of one of her many tattoos.

The one on Autumn Neugent’s right forearm shows a looping rollercoaster – with a bright orange wheelchair flying off the end. It symbolizes some of the twists her life has taken since she was diagnosed with multiple sclerosis in 2009.

“Every year, on the anniversary of my diagnosis, I get a new tattoo that is inspirational to me,’’ says Neugent, 38 and a native of Madison.

And sometimes, depending on how the year goes, she’ll modify an old one. Her back tattoo used to read “What doesn’t kill me makes me stronger.” Now the last word reads “stranger.” It’s some of the humor that she uses to deal with a condition that can leave her teary and exhausted from fights with everyday objects.

She’s using her platform as Ms. Wheelchair Wisconsin to get people to see wheelchairs and the people who use them with new eyes. While she fought against using a wheelchair at first, she now sees it as a handy tool that lets her participate as fully in life as possible.

“I want to talk about ‘ability,’ not disability. I hate the word disability because the prefix dis means opposite. I’d rather talk about dif-ability,’’ she says. “My motto is: Don’t let the wheelchair fool you.”

“There are so many things I’m able to do: I downhill ski, I waterski, I kayak. Everyone has so much ability, we don’t need the couldn’t and the shouldn’t.”

Neugent competed in the 2019 American Birkebeiner cross country ski race, her seventh time doing the 3.7 mile Birkie Adaptive, and says there’s nothing like skiing down Main Street in Hayward to cheering crowds. 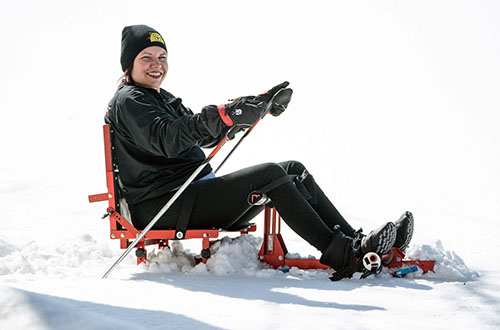 She hasn’t let MS stop her from a lifelong interest in sports. She was a three-sport athlete at Madison East High School, but she says that in retrospect, she had some intermittent symptoms of MS as young as age 14. She’d experience numbness in her chest and her arms, but by the time she could see a doctor, it would be gone.

She gave birth to daughter, Jada, and continued to play slo-pitch softball in her 20s. She remembers tweaking her knee while tagging up at second base. She developed a limp that got worse and worse, even though doctors couldn’t find a reason for it.

Eventually, the pain drove her to the old East Towne Urgent Care clinic, where a physician told her she suspected MS. Later, brain scans showed the telltale lesions that help confirm an MS diagnosis.

“It was bittersweet to finally have a name for what I had been experiencing,’’ she says.

Because MS affects so many parts of the body, Neugent has a small army of UW Health specialists she sees. All of them are inspired by her will to keep moving.

“Autumn confronts a multitude of challenges to her person and life brought on by having MS, but she also challenges the MS,’’ says her primary doctor Dr. Chris Luzzio, a neurologist with a specialty in MS. “In her mind’s eye, you perceive her thinking, ‘Wheelchair? What wheelchair?’

“She is unstoppable and it’s been a pleasure and an education to know her.”

She also sees Dr. Sarah McAchran, of urology, for the bladder-control issues that result from the impaired nerves.

“It is always a pleasure to see her and catch up on her adventures,’’ says Dr. McAchran. “Her determination and optimism are truly infectious.”

But Neugent will be the first to tell you that not every day of living with a chronic illness is bright and sunny.  And so she also sees Dr. Erri Hewitt and Dr. Kathleen Murphy-Ende, of behavioral health, for the depression and other emotional challenges that are part of living with MS. 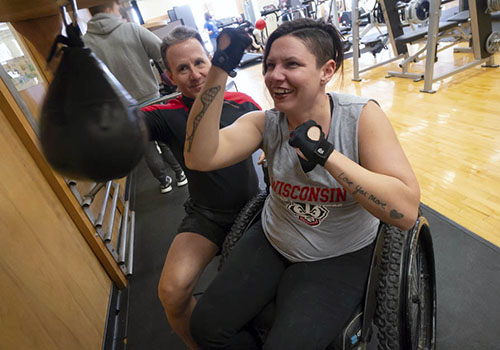 She’s very active in both the UW Natatorium Adaptive Fitness class led by Tim Gattenby and at the occupational therapy assistant program at Madison College.

“I love working with students,’’ she says. “I used to be a coach and it’s very much the same kind of thing.”

A description of a skiing trip to Durango, CO a few winters back shows how this former competitive athlete is dealing with her current challenges. While using a “skibike,” she lost control, flew over the handlebars and tumbled down the hill, landing in a tangle of bike and body. As the guides rushed to her aid, they could see her shaking.

“The shaking was me laughing hysterically,’’ she says. “It was so much fun to fall freely and not be wrapped in bubble wrap, so to speak.”

When she woke up the next morning, bruised and sore, she laughed again.

“I laughed because it was the first time in years I had earned my bruises. They were not from a fight with my pants or falling off the toilet, which, trust me, happens more than you would think.”

Neugent freely admits having bad days, too, when she shuts herself in a room and cries until she’s cried out. But the message she’ll be giving during her year as Wisconsin’s wheelchair queen is that everyone in her situation has those bad days.

“It’s okay to go through denial, it’s okay to cry and it’s okay to fall,’’ she says. “It’s the getting back up after you fall that is the accomplishment.”

Neugent is raising money to pay her travel expenses to the Ms. Wheelchair America contest.