Moving Toward Earlier Detection and Personalized Therapies in Ovarian Cancer

Moving Toward Earlier Detection and Personalized Therapies in Ovarian Cancer 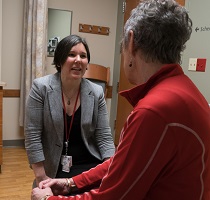 Ovarian cancer survival rates are slowly improving, but are still hampered by the fact that the cancer is often detected only when it is very advanced.

“I think the best way to make a huge difference in ovarian cancer survival is to detect it earlier,” said UW Carbone Cancer Center gynecologic oncologist Lisa Barroilhet, MD. “So I’m throwing some weight behind it now.”

Barroilhet and Carbone Cancer Center members Liz Sadowski, MD and Steve Cho, MD were recently awarded a UW Carbone Cancer Center pilot award for their proposed clinical trial that could lead to earlier detection of ovarian cancer. The goal is to develop a new imaging test to screen women who have hereditary risks for ovarian cancer, specifically BRCA genetic mutations.

Currently, as many as 60 percent of women with a BRCA mutation will develop ovarian cancer. For this reason, many women opt to have their ovaries and other reproductive organs removed, meaning they face earlier menopause and cut short their ability to have children.

Barroilhet expects that by screening BRCA women, she will be able to identify changes in ovary structure and function when the cancer is in its early stages and much more effectively treated.

The imaging test is based off of a screen that has shown success in detecting prostate cancer in men. It uses PET scans to detect a protein, PMSA (for Prostate Membrane Specific Antigen) that is seen in early-stage prostate cancers. Despite its prostate-specific name, PMSA is actually seen at high levels in many other cancers – including ovarian.

“The first part of the pilot study is that we need to standardize the test for women, because PMSA imaging has only been done on men,” Barroilhet said. “Once we figure that out, we can start to screen women with known ovarian cancers and then we can move onto screening more high-risk women.”

While the pilot study, which is not yet open to patient enrollment, focuses on high-risk women, Barroilhet is cautiously optimistic (though emphasized she has “no illusions”) about its potential as an early-detection screening tool for many women in the future. The trial also showcases the benefits of working in a Comprehensive Cancer Center, which brings together researchers with diverse expertise.

“What we’re really testing is the dosimetry and sequencing of an imaging study and that’s totally outside my wheelhouse,” Barroilhet said. “But that’s the beauty of collaboration, and of Liz and Steve willing to mentor me.”

Until better early detection enters the clinic, Barroilhet added that she is very excited about recent, FDA-approved changes to ovarian cancer treatment and their implications for bringing personalized medicine to ovarian cancer patients. For example, the PARP inhibitor niraparib was previously approved as maintenance therapy for patients with recurrent ovarian cancer.

“What has changed in the last six months is that it’s now available for maintenance therapy, meaning our patients can stay on this drug long-term to prolong remission. It’s really exciting,” Barroilhet said. “But the most exciting is that the FDA approval is for recurrent ovarian cancer regardless of BRCA status because the clinical trial supported that most patients saw a benefit, making this previously niche therapy available to a much broader population.”

The reason BRCA-targeting drugs show success in non-BRCA ovarian cancers is not fully understood, but it is likely because these cancers have mutations in genes that have cellular functions very similar to that of BRCA. Barroilhet said research is ongoing to try to genetically define this non-BRCA patient population that most benefits from BRCA-targeted therapies.

“Until recently, testing for the genetic mutations that likely contributed to tumor formation, was not recommended in gynecological cancers because there were so few targeted therapies,” Barroilhet said. “In addition to BRCA-targeted therapies, we’re now making the first steps in truly personalized medicine for ovarian cancer. We needed it.”

Dr. Barroilhet and several of her colleagues will be presenting the Ovarian Cancer Survivors Course on Saturday, October 7 at Madison Marriott West, Middleton. Find more details about this FREE event and register online