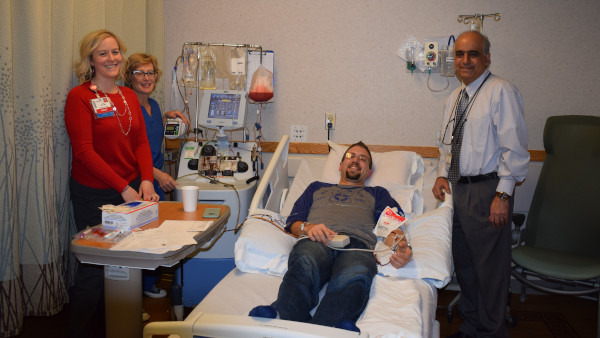 In December, the 29-year-old teacher from Oshkosh made the trip to Madison to have stem cells collected from his blood. It’s the second time he’s “matched” with a patient in need of a transplant. In 2016, he made a similar trip to UW Hospital to have his bone marrow collected in an operating room. This time around, however, his cells were harvested through a procedure called leukapheresis, which pulls stem cells from a patient’s circulating blood, no operation or anesthesia needed.

“You get some achy bones for a couple of days, but it’s completely worth it,” he said.

“Over the last year, we have been receiving an unusual number of requests for collecting these unrelated donors,” said Peiman Hematti, MD, a professor of medicine in the UW School of Medicine and Public Health. He’s also a UW Carbone Cancer Center member, director of the Clinical Hematopoietic Cell Processing Laboratory and medical director of the Apheresis and Hematopoietic Cell Collection facility.

It could easily have been more.

“We’ve had to turn down several requests in recent weeks, because we just don’t have the capacity to do them all,” said BMT coordinator Lauren Racki. “There’s a huge need in the country for this very vital service.”

There are two main kinds of blood and marrow transplants – autologous and allogeneic – which are used to treat various forms of cancer and noncancerous diseases.  Whereas an autologous transplant involves a patient’s own cells, an allogeneic transplant uses those of another person. The donor must have at least a partial genetic match with the recipient, and often, family members can fit the bill.

However, there are many cases where an ideal family donor isn’t available, and that’s where unrelated donors come in. Through the National Marrow Donor Program (NMDP), which runs the Be The Match registry, individuals can sign up to become a potential bone marrow or peripheral blood stem cell donor, and put a tissue sample on file. If they are later found to be a good match with a patient in need, the NMDP will put in a request with a collection center to bring the donor in and do the procedure.

As the volume of patients started increasing in the last year, Hematti and his team also started to take notice of where these donors were coming from. “There was a time that most of these unrelated donors were coming from the state of Wisconsin,” he said. “But recently, we have been receiving requests from places all over the country.”

All of a sudden, donors from states like California and Florida were being flown to Madison for their bone marrow collection. The BMT team started putting pushpins in a map to keep track of what states they were coming from. 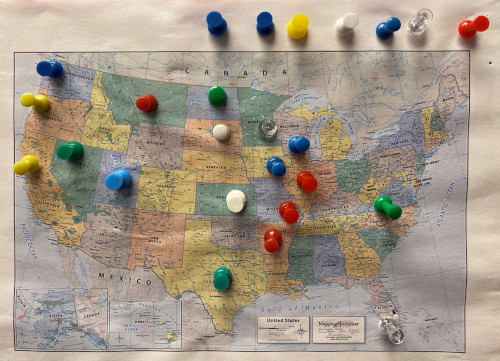 It might seem unusual that donors are being flown in to Madison from across the country, especially when there are other medical facilities closer to home that could do the same procedure.

Hematti believes part of it can be explained by high demand and limited availability of BMT physicians experienced in doing this procedure. “These days, there are less and less of these centers, like us, in the country that are doing bone marrow harvests,” he said.

It may also be due, however, to UW’s reputation among collection centers as a good place to send donors. “I’ve been told that we’re very accommodating, we provide good stem cell products and patients like coming here,” Racki said.

That’s because UW is committed to giving donors who come here the best experience they possibly can. For many donors, it’s the first time they’ve travelled to Wisconsin, and Jan McMannes, a clinical nurse specialist who has been with the UW BMT program since its inception, wants to ensure they remember their visit to Madison fondly. “I think we treat them like semi-royalty,” she said. “We give them our full attention, and make sure we’re attending to their needs.”

Donors and their family members are put up in a local hotel for the duration of their stay, and are encouraged to explore Madison. They also get a very special food recommendation – cheese curds – a unique and calcium-boosting delicacy.

Bone marrow and stem cells harvested from donors at UW have been sent to centers all over the country and the world for patients in need. However, the donor is not told where their cells are going and who is getting them. But after one year, if the donor and recipient both consent to it, the National Marrow Donor Program will share their contact information with each other.

When it came to potentially meeting the recipient of his bone marrow, Sanderfoot didn’t hesitate. Neither did his recipient, who now has a clean bill of health after the transplant. After some initial messages, they made a plan to meet in Boston, the city where the recipient of Sanderfoot’s marrow had the transplant done. They met in the hospital where she was treated, and Sanderfoot was able to meet her treatment team. They also got out and explored Boston, including a visit to the aquarium and a Red Sox game at Fenway Park. “It was an awesome experience,” he said.

The two still keep in touch. They even texted on the morning of his recent stem cell donation. Sanderfoot says he hopes to eventually also meet the patient who will receive his blood stem cells and have a similar experience.

He’s also encouraging others to follow in his footsteps to join the bone marrow registry, even if it means setting aside concerns over how much a potential procedure might hurt. “Think big picture about what you’re getting a chance to do,” he said. “It’s absolutely worth it.”

Meanwhile, Hematti hopes to continue being able to meet a need that shows no signs of slowing down. “From anesthesiologists to operating room staff and post-operation recovery personnel, plus many more, it takes a village to be able to do this,” he said. “We’re happy that we can provide this service for the bone marrow transplant community worldwide and wish we could do more of them.”