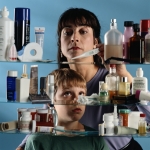 MADISON – Many parents may be endangering the health of their children because they often misinterpret information and labeling on pediatric cough and cold medications available over the counter.

That's according to results of a new study appearing today in The Journal of Pediatrics.

Nicole Lokker, a pediatric pharmacist at American Family Children's Hospital and oncology pharmacist at University of Wisconsin Hospital and Clinics, is a co-author of the study, which was done while she was a pharmacy resident at Vanderbilt University. She received her pharmacy degree from the School of Pharmacy at UW-Madison.

Many cold medications for infants were removed from drugstore shelves in 2007 after the Food and Drug Administration determined they may cause serious or life-threatening side effects in children under two years old. However, Lokker says a number of medications aimed at children less than 6 years old are still available to the public.

"There still isn't enough safety and efficacy data on how to use these drugs for children less than six years old," she says. "We are heading in the right direction, but it's not as good as it could be."

Researchers found that 86 percent of those in the study - mostly mothers of infants - thought over-the-counter cold medications were appropriate for children under 2 years old. More than half of the respondents thought the medication was safe to give a 13-month-old child with cold symptoms.

Lokker says there have been a number of incidents where parents have given their children too much of the medicine because they weren't clear on the proper dosage.

"The biggest risk is overdose," Lokker says. "We know from previous studies that over-the-counter cough and cold products containing antihistamine and decongestants have been connected to the death of more than a hundred infants nationwide in the past 40 to 50 years. We also know that hundreds of emergency department admissions and poison-control center calls have resulted from misuse or overdose of these medications."

The researchers also say that labels including the word "infant" and pictures of babies, teddy bears and droppers influenced these decisions. Parents with lower math skills were also more likely to misunderstand label instructions.

The study recommends that labels on pediatric cold and cough medicines should be changed to remove misleading graphics, and that dosage instructions should be written at lower literacy and math levels.

"Pictures and language on labels are confusing to many consumers, often resulting in giving medications without adequate directions," says Lokker. "If you are going to give a cold medicine to a child under 6 years old, you should seek advice from a health care professional such as a pediatrician or pharmacist."