Mindfulness Meditation in the Treatment of Alcoholism

Mindfulness Meditation in the Treatment of Alcoholism 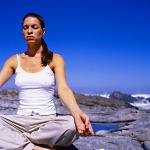 MADISON – Recovering alcoholics may benefit in the battle over the bottle if they practice mindfulness meditation.

That's according to a Wisconsin physician-researcher who is one of the few in the country testing the possible connection between meditation and the prevention of relapse to drinking among those dependent on alcohol.

Dr. Aleksandra Zgierska, assistant professor of family medicine at the University of Wisconsin School of Medicine and Public Health, was the lead researcher in a 16-week pilot clinical trial with 19 participants recruited from addiction treatment clinics. She says the results of her first study (published in 2008) showed mindfulness meditation could be a useful supplementary technique for alcoholics trying to avoid relapse.

"Our findings were consistent with those of large randomized trials of conventional therapies for alcohol-relapse prevention," says Zgierska. "Those in our study reported being abstinent about 95 percent of the days, with 47 percent reporting complete abstinence during the whole 16-week-long study."

Zgierska, who is also a practicing physician with a special interest in addiction medicine, says the use of meditation to treat alcoholism had never been rigorously studied before, and initially, there was skepticism within the medical community.

"When we started the project, it was met with some concern," she says. "Some people said ‘You're going to have alcoholics meditate?' That's why we did the pilot study - to show that it could be possible and helpful for them. We thought meditation could teach people new skills to cope with life challenges and create an emotional and intellectual 'platform' to tackle not just drinking by itself, but also other problems that may increase relapse risk."

Those problems may include anxiety, depression, or the inability to deal with stress or alcohol craving, all potential triggers for recovering alcoholics to return to drinking as a means of comfort.

One meditation technique Zgierska uses is called "urge surfing." Developed by Dr. Alan Marlatt from the University of Washington in Seattle, it teaches alcoholics mindfulness-based coping mechanisms ("observe what is happening in a non-judgmental way, and with acceptance") that reduce chances for a relapse.

"While meditating, one visualizes a craving or urge as an ocean wave that begins small and gradually builds to a large cresting wave," she explains. "Using the awareness of one's breath as a 'surfboard,' the goal is to 'surf the urge' by allowing it to first rise and then fall without being 'wiped out' by giving in to it. Successfully 'surfing the urge' can weaken addictive conditioning and enhance healthy coping skills."

Zgierska emphasizes that meditation would likely not be a replacement for standard therapy but, rather, another option that patients might find useful. Michael Waupoose, program manager for Gateway Recovery, a UW Health addiction treatment center, also believes that mindfulness meditation therapy could help recovering alcoholics prevent relapse.

"Many components of mindfulness meditation practice can blend really well with traditional models of relapse prevention and help alcohol-dependent people become abstinent," he said. "For example, if a patient has a very bad argument with his spouse or children, his anxiety will increase; he may get frustrated and angry; and, commonly, he will automatically leave that situation and go out for a drink to relieve stress and tension. Obviously, this is an example of unhealthy coping with discomfort.

"Mindfulness meditation would teach that person how to be present in that situation, how to be conscious of what's happening to their body, and how to deal with it without reacting to it automatically," Waupoose continued. "It teaches people how to be conscious of their feelings or thoughts without having to follow them all the way through."