Match Day at UW School of Medicine and Public Health

Match Day at UW School of Medicine and Public Health

MADISON - You could feel the anticipation and excitement as students, faculty, staff, family and friends waited in the packed Alumni Hall in the Health Sciences Learning Center to hear where the students’ training would continue.
A few times, the room even went dark as the electricity unexpectedly went out. But the electricity blips didn’t deter Patrick McBride, MD, MPH, associate dean for students, and Susan E. Skochelak, MD, MPH, senior associate dean for academic affairs, who were busy offering supporting words as students were called up to the microphone one by one to open envelopes and announce their placement.

When students came up to learn their fate, they donated a dollar to the Second Harvest food pantry and put a pin on the map to mark their match location. Class leaders organized a food drive and they delivered the collection after the ceremony.

This was McBride’s fourth year involved with organizing Match Day, held on March 20. As associate dean for students, McBride was able to work with most of this class from start to finish of their UW medical education. A 25-year faculty member, McBride says Match Day never lacks in suspense.

“When they come up (to learn their match location), the whole journey comes before our eyes,” McBride said. “I’m just aware of how hard people have worked, the things that happened to them while they were in medical school, what extraordinary people they are. I’m so proud of them.” 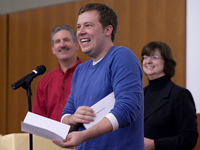 Match Day is scheduled simultaneously at all medical schools in the country. Students find out about placement from computerized results of the National Resident Matching Program (NRMP), which uses a computer algorithm to match the students’ choices with residency program choices. This placement fills the available training spots at U.S. teaching hospitals.
According to the National NRMP, more than 94 percent of seniors who applied for residencies this year were paired with a program of their choice — the highest percentage in more than three decades.

“It all seems mysterious to them, but the computer does the right thing,” McBride explains. “It’s looking out for them, matching them with the highest place, so it came out just as it really should.”

This year’s Match Day featured a live Web broadcast – a first for the UW School of Medicine and Public Health.

“Every year we have people who are doing an international rotation or who are not in Madison for one reason or another, and who want to just see where they are going or see where the their friends are going,” says Chris Stillwell, director of academic and career advising for the UW School of Medicine and Public Health. “It’s technology that allows us to reach family and friends who may not (otherwise) get to participate.”

The students who arranged for family to watch them from the simulcast made everyone aware of how far the technology could reach. When Faiz Syed went up to read his match location, he said hello to his parents watching him in Philadelphia and his wife watching in India. Syed announced that he would be going to Wheaton Franciscan Healthcare - St. Joseph Hospital in Milwaukee, Wis. for his transitional year and to Geisinger Health System in Danville, Penn., for diagnostic radiology training. 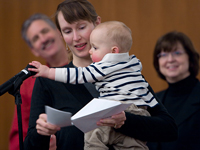 “This year is a real success story for rural medicine and primary care. Students are training in rural sites across the country including Duluth, Minnesota; Pocatello, Idaho; and Baraboo, Wisconsin. Baraboo is as good a place for rural medicine as anywhere in the country, and it’s getting two of our best students-- Dan Sutton and Bridget DeLong who both could have gone anywhere in the country. They are lifelong Wisconsinites, and Dan recently qualified for the Olympics trials in the Marathon,” said Stillwell.

Bridget DeLong grew up on a farm in Clinton and can relate to the small-town clinical setting.

“Right from the start, I visited there one afternoon and it just felt really right,” DeLong said. “I found out about the rural medicine track around my first or second year when I was talking to Dean Crouse, he’s the dean of rural and community health. He acted as an academic mentor in many ways and he knew me well. It was definitely a place I wanted to end up. It’s a very good fit.”

She’s happy she will stay in Wisconsin.

“My parents are still down in Clinton and happy to see me not stray too far away from home, and my fiancé lives in Spring Green, so it’s nice for us and a good location,” DeLong said “I also matched with my good friend, Dan Sutton. We are glad we are in the same spot.”

As a married couple, Magnolia and Jonathon Printz say the Match Day experience was particularly challenging, though they had already overcome one significant hurdle.

“The residence match wasn’t as difficult as applying for medical school and getting in at the same school,” Jonathon said. Originally from Milwaukee, the Printzes were placed together at the University of Michigan at Ann Arbor.

For Magnolia, the Match Day experience was emotional.

“For me, in the moment, everything sort of slowed down and my heart was racing,” Magnolia said. “We get to know where we are going to go and have a set plan, because I think the hardest part of the match is waiting for three weeks, and like you’re kind of in limbo. So it was a relief we are both in really good schools (studying) anesthesia and orthopedic surgery, and so we couldn’t be happier.”

They said selecting schools was difficult, since not all programs were equal for both of their fields.

“It was really nerve-racking as a couple,” Jonathon said. “One program may have a good anesthesiology program and not a good orthopedic surgery program, and vice versa. When we sat down to make our list, we really had to make some compromises and say, ‘Look, that may be really good for you, but you have to look out for a place that’s good for both of us.’ Fortunately, it worked out best for both of us.”

She also said to let the programs know you’re interested in a couples match, so those programs can have conversations with one another earlier in the selection process.

“In the end, you know you’re going to be with the one you love,” Magnolia says.