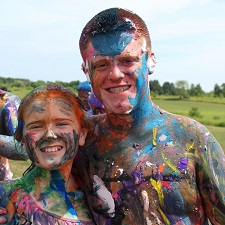 At first glance, Camp Kesem sounds like any summer camp. There are arts and crafts, color wars and “messy” wars, complete with a Slip-N-Slide coated in rivers of fresh paint. The campers seem like any kid enjoying their time away from home, too.

But all campers at Camp Kesem have one thing in common that most children their age do not.

“Camp Kesem is a camp for kids who have a parent who has or had cancer or has passed from cancer,” explains Bee, one of the camp counselors. [Okay, that’s her camp name. Her real name is Carrie Snodgrass, and she is a senior Nursing and Spanish major at UW-Madison.] “But it’s not a therapy camp by any means. It’s a week for all of the campers to be whatever person they want to be, and just have crazy, wild fun and have that childhood back that families in this situation tend to lose.”

Camp Kesem (kesem means magic in Hebrew) is a national organization that has student-run chapters at over 100 universities. Any child, age six to eighteen, who has a parent who had or has cancer is eligible to attend. UW-Madison has one of the largest chapters in the country, and this summer is hosting three week-long camps with a total of over 300 campers. Each counselor – currently, 140 UW-Madison students – raises $500, which allows campers to attend at no cost.

While nearly the entire week is run like most summer sleepaway camps, a key difference is the “empowerment” ceremony, held in the middle of the week. Everyone sits in a circle with mood lighting and “warm and fuzzies” all around to create a safe, respectful space.

“Then, campers, or even counselors, can choose to go in the middle of the circle and share their story about ‘Why they Kesem’ and how camp has made them stronger,” Snodgrass says. “That’s when we say you really feel the magic of camp. Because earlier, you know you’re at a cancer camp. But after the ceremony, you’re like, ‘All these people are going through and feeling the exact same things that I am.’”

Jeff Simpson, a patient at the UW Carbone Cancer Center, and his wife have been sending their 16-year-old son, “Turtle,” to Camp Kesem for eight years now. Their daughter, “Penguin,” is 13 years old and has been attending for seven years, ever since she was first old enough.

“Cancer sucks and it’s a roller coaster, and the bad times are bad for everybody,” Simpson said. “At camp, my kids get to be around people who have similar experiences. They both have best friends from camp that they talk to throughout the year. I know my son talks to some of his camp friends on social media every day.”

Simpson and his wife have also formed close friendships with parents of other campers, and they stay connected with the counselors and watch them grow from college students to young adults.

Changing lives is how Snodgrass sees it, too. Though she did not know about camp as a kid, her father was diagnosed with cancer when she was in high school, and passed away her freshman year of college.

“I was at the student org fair my freshman year, and I was about to leave, when I saw a poster out of the corner of my eye that said ‘parent with cancer.’ And I was like, ‘I have to check this out, don’t I?’” Snodgrass recalls. “I joined, and I wasn’t really involved much more than I had to be. But then I went to camp, and everything changed. Camp Kesem changes your life.”