Maintaining Peak Athletic Performance as You Get Older

Maintaining Peak Athletic Performance as You Get Older 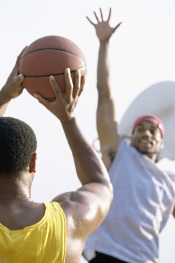 What is peak athletic performance? Knight defines it as an athlete's ability to perform at his or her best, but it might be most easily understood in its absence.

An older athlete "used to be able to play basketball four days a week, and now can only play once or twice," Knight says. "That might be because they don't have the energy to do it anymore or they're battling some kind of pain or injury. That's a good indication that you're no longer at your peak - you can't maintain the level of competition you want."

The age at which this happens varies by athlete and sport. In a study published to the Journal of Physiology in 2008, researchers found that endurance athletes tend to peak around 35, "followed by modest decreases until 50 to 60 years of age, with progressively steeper declines thereafter."

Sports that rely more heavily on explosive strength and speed, like basketball and football, have earlier peaks - commonly in the mid- to late-20s.

"You're going to have diminishment as you age," Knight says. "Your muscles don't contract as hard. Your tendons and connective tissues become more stiff and less resilient, so they don't store energy quite as well. Your nerves don't fire as quickly."

Time may be the ultimate arbiter, but athletes who want to continue to compete into their 30s and 40s and beyond can cater their training to their specific physical and mental needs.

Knight stresses that athletic performance is predicated on many factors, not just age. Lifestyle is one particular area that older athletes can control and would be wise to monitor.

"How are you living?" he says in recounting the questions he poses to the athletes with whom he and his staff work. "Are you recovering properly? Are you sleeping and eating well? Are you maintaining a high level of mental acuity?"

Knight is also an adamant proponent of variety, which can generate an enthusiastic training attitude and keep the body fresh and versatile. It's easy for aging athletes to focus on the sports they like most, to the exclusion of everything else, but such a narrow athletic perspective can be hard on the body.

"A runner who runs 20 miles every week is engaging in the same pattern for three or four hours a week," Knight says, adding that repetition increases the risk of overuse injuries that spring up more frequently in older athletes. "Mixing in some other activities - canoeing, rowing, soccer, weightlifting - to maintain that variety is important for adult athletes, to keep their bodies moving in multiple directions."

Variety and versatility, in fact, are staples of Knight's sports performance philosophy, as he realizes that the best athletic training involves the full complement of services his program provides.

"We certainly have the resources for physical training and teaching athletes how to move better and get stronger and maintain their speed and strength," he says. "But we also work with sports nutrition and sport psychology. We have resources for solid recovery training and education. Sports performance is multifactorial, and here at UW Health Sports Medicine, we've organized our sports performance program with the staff, facility and programs to help athletes stay healthy and maintain their peak performance."