Looking for Improved Pancreatic Cancer Therapies, One Cell at a Time

Looking for Improved Pancreatic Cancer Therapies, One Cell at a Time 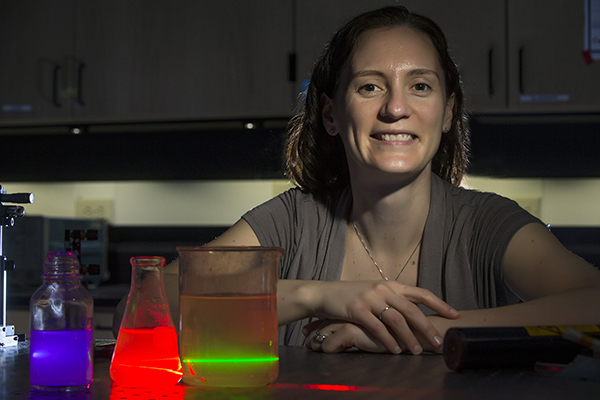 While almost all cancer types have seen at least some boost in survival rates over the past several decades, survival rates of pancreatic cancer have barely budged. With most cancers being diagnosed at later stages, less than ten percent of patients are expected to survive five years after diagnosis.

According to biomedical engineer Melissa Skala, PhD, an investigator at the Morgridge Institute for Research and a member of the UW Carbone Cancer Center, this is what drives her to study pancreatic cancer.

“I’m motivated by the impressive gains we have made in a lot of cancers, in particular in targeted therapies for cancers, whereas pancreatic cancer has no effective therapies and really no targeted therapies,” Skala said. “So, drug development and detection are lagging behind.”

Skala’s lab, in collaboration with oncologist and UW Carbone colleague Dustin Deming, MD, is researching technology that could quickly screen cancer drugs to find the most effective ones for fighting pancreatic cancer. Her lab receives samples of pancreatic tumors from patients though UW Carbone’s Biobank, and grows them into miniature three-dimensional tumors-in-a-dish called organoids. Her lab then uses these organoids to test different cancer drugs.

“We test multiple therapies on replicates of the patient’s tumor and image them with a microscope and determine from the metabolism of those cells which treatment is likely to work best,” Skala said.

Skala is interested in cellular metabolism for a number of reasons. Cells need energy to divide, and they get this energy by breaking down food sources.

“We also know that metabolism is abnormal in cancer cells, and cells use their metabolism to circumvent drugs,” Skala said. “I think of metabolism as a bellwether of the cell, so it’s telling me what the cell is thinking, and it’s very sensitive to drug response and resistance.”

The technique that Skala uses to study metabolism, dubbed “optical metabolic imaging” since they use a microscope to make measurements, can determine if a treatment is working within a matter of days, as opposed to the weeks or months it can take to see if the patient responds.

These resistant cells can grow into a whole new tumor, which causes recurrence in cancer patients.

“We want to look at single cells, so we can identify treatments that kill all subpopulations of cells in the tumor so that we don’t have this problem with recurrence.”

This technology is still in pre-clinical studies, but Skala and colleagues are working to validate it by treating the tumors-in-dishes with the same drugs that the patient will receive, and correlating the results of their studies with how the patient actually responds.

If the technology proves to be accurate, Skala hopes to use it to test experimental drugs to determine if they are good candidates for clinical trials, in an attempt to get better pancreatic cancer drugs to market. She also hopes to test therapies that are already FDA approved in order to find the most effective treatment available for individual patients.

“This is relevant to pancreatic cancer, because we don’t have time to go through multiple drug regimens to figure out the one that works best for the patient because they just don’t have that time,” Skala said.