Chronic infection with hepatitis B or human papilloma virus increases the risk for developing cancers. 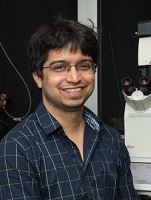 That relationship between a virus and its infected host cell is complicated, and new UW Carbone Cancer Center member Kinjal Majumder, PhD, studies how these DNA viruses co-opt the host’s machinery for their own benefit.

“The thought had always been that after a virus goes into the nucleus of a host cell it just passively establishes sites where it can replicate,” Majumder said. “So, we wanted to drill deeper into the nuts and bolts of how this process occurs.”

Inside the nucleus, a six-foot-long strand of DNA molecule is folded and packaged in a space that occupies one hundredth of a rice grain. However, this DNA still needs access to essential proteins so that it can replicate, make proteins to carry out life processes, and repair itself when subjected to damage.

“A DNA virus that enters a host cell needs to find an appropriate nuclear zip code to successfully express, replicate, and persist over long time,” said Majumder, who is also an assistant professor in the Department of Oncology at UW.

Using a cancer-cell-targeting type of virus called Minute Virus of Mice (MVM) as their model system, Majumder and his colleagues developed sequencing-based methods to help them identify the invading virus’s preferred zip codes within the nucleus. They found that MVM sets up replication centers in regions prone to undergoing DNA damage — where cancers can arise. Since these areas need to recruit DNA repair and replication proteins more frequently, Majumder adds that they could offer a virus more opportunity to hijack those processes for its own ends.

Majumder and his colleagues recently showed that MVM expresses one protein called NS1 that binds to the viral DNA before transporting it to DNA break sites.

“You can think of the NS1 protein as an engine that's dragging that entire train [viral genome] to the cellular site of DNA damage, and once it gets to those sites then the virus can replicate,” Majumder said.

Having looked at the virus’ side of the equation, Majumder’s lab is now interested in finding out which host factors the virus uses to localize. With a robust virology program on campus — including research from Paul Lambert, PhD, and Dan Loeb, PhD, on the roles of HPV and hepatitis B respectively — Majumder also hopes to expand these studies into tumor viruses.

Like MVM, both hepatitis B and papilloma viruses localize to DNA breaks, but rather than replicating as a separate entity, these viruses eventually integrate into these cellular sites.

“The working model is that some point during or after this localization, integration occurs, leading to cancer, but the steps in this process aren’t well understood,” Majumder said.

Because the techniques Majumder’s lab uses can detect viral DNA that has not integrated into the host genome, researchers can detect the cellular sites where viruses can localize to set up replication factories without integrating. They create hybrid DNA molecules between the host and viral DNA and use high-throughput sequencing to then identify the viral zip codes. Majumder’s lab has developed additional imaging techniques to study how viral genomes localize to DNA breaks and how this might drive cancer progression.

“Using these tools, we hope to be able to develop a comprehensive picture of where tumor viruses localize, how they hijack cellular proteins, and how they can cause cancer,” Majumder said.