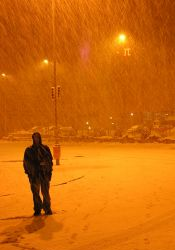 MADISON - Are you dreading this winter already? Do you feel like crawling into bed with a package of cookie dough, pulling the covers over your head, and not coming out until spring?

Plenty of people feel the same way. UW Health psychiatrist Dr. Nancy Barklage says that nearly 25 percent of people who live at northern latitudes suffer from at least some symptoms of SAD, the depression that hits during the darkest times of the year. Besides depression, symptoms include low energy levels, overeating, a craving for carbohydrates, weight gain, an increased need for sleep, and a lack of interest in sex and in socializing.

Dr. Barklage, associate professor of psychiatry at University of Wisconsin School of Medicine and Public Health, specializes in treating patients with the disorder. She says that about 8 percent of us have full-blown SAD and another 17 percent have a milder version with some of the symptoms, especially carbohydrate craving, decreased energy and increased need for sleep.

"That means that about one in four people are affected," she said.

Fortunately, since the disorder was documented in the 1980s, an effective treatment regimen has been established.

"The treatment of choice is light therapy," says Barklage. "I was initially skeptical that it would work, but I have been very impressed with the results."

Researchers once thought that winter's short days were to blame, and so they advocated light therapy before sunrise to extend the length of the day. Since then, Barklage says, research has shown that it is the intensity of light that is important.

For light therapy to work, the light needs to penetrate the retina. Barklage often recommends that patients with SAD begin their morning under a bright light, to energize them for the day ahead.

"I have a lot of patients who have their full-spectrum light next to their beds," she says. "They roll over, turn off the alarm and turn on the light. It also helps them to wake up."

Timing of the light treatment is important. Too much light too late in the day can be too stimulating, making it difficult to fall asleep. She recommends afternoon light only if patients find themselves coming home from work and falling asleep right away.

"It can change circadian rhythms and reset your sleep clock," she said. "Bright light in the morning resets the sleep onset, allowing people to fall asleep earlier. Bright light late in the day will keep you up later."

She tells patients to get a bright light with at least 10,000 LUX, a white light that includes the full-spectrum light minus the ultraviolet, which can harm eyes and skin. Going outside on a sunny winter day helps, too, as long as you protect your eyes and skin from UV light.

Barklage is less willing to recommend blue lights, which are being marketed for SAD treatment, because there is concern they may damage the eyes. More research is needed, she says. Tanning beds aren't recommended because the UV light they give off can cause skin cancer and damage the eyes.

In patients who don't fully recover their energy with light therapy, she sometimes prescribes anti-depressants.

So an investment in full-spectrum lights might, for at least a quarter of the population, make as much good sense as investing in a snow blower.

"People can suffer from SAD all the way into March, April and even into May if we have a dark spring," she says.

But hating winter doesn't necessarily mean you have SAD. It could just mean that you accurately remember the long winter of 2007-2008 that set snowfall records from Colorado to Maine.

"I have never heard so many people say they are dreading winter," Barklage says. "It was such a brutal winter last year, it's like people never really recovered."
Publish date: 12/10/2008
Date Published: 04/30/2009