Learning from the Disabled of the Animal Kingdom

Learning from the Disabled of the Animal Kingdom 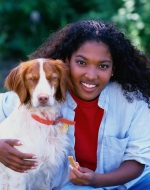 MADISON - Porky Pig, the stuttering cartoon character who was a star on Looney Tunes, has made kids laugh for decades.
That famous speech-impaired pig is also a good example of one way in which humans try to come to terms with their own complicated feelings about disabilities, says Dr. Walton Schalick, a physician and medical historian at the University of Wisconsin-Madison.
Observing the culture of animals with disabilities can help humans understand disabilities of their own kind, says Schalick.
As an example, Schalick points to "Frankie, the Walk 'n Roll Dog," a recently
published book about a Wisconsin dog that lost its hind legs. The family had roller wheels fashioned for it as a prosthetic, and then wrote about the happy-ending experience.
Since the 1950s, scientists have seen that some macaque monkeys in
Japan have significant rates of physical disabilities.
"Although one study found that infant mortality for macaques with disabilities was three times that of those without malformations, maternal 'caretaking' evidently overrules natural selection, as many of the young monkeys survive," he says.
A research team has begun a study on these unusual mother-infant pairs.
Along similar lines, primatologists have found that chimpanzees display some wound-tending behavior when one of their troop is hurt.
"While we study macaques and other primates with disabilities, these same species are trained as assistants to human beings with disabilities, just as dogs and other animals are," Schalick says, revealing more of the tension in human thinking about disability.
Disabled animals also help humans in their relationship with the environment, adds Schalick. In 1995, a group of Minnesota school children on a field trip found that half of the frogs they encountered had limb and eye deformities. Since then, biologists have observed that frogs with deformities are being born at alarming rates across North America.
"Evidence now suggests that a variety of factors may have been involved - from contaminants to parasites from predators to nutritional changes and run-off timing - to induce these deformities in frogs," Schalick says. "Like the canary's extreme sensitivity to gas, which made it an early warning system for coal miners, animal disabilities can be a harbinger of problems to come in the relationship between human beings and the environment."
Schalick thinks about disability every day. A specialist in pediatric rehabilitation, he cares for children with physical disabilities at the American Family Children's Hospital, associated with University of Wisconsin Hospital and Clinics, as well as the Central Wisconsin Center.
He challenges medical, graduate and undergraduate students to think about the complexity of disability in the classes he teaches at the UW School of Medicine and Public Health.
Xenodisability and zoodisability are the terms Schalick invented for scholars to use when they refer to disability in the animal world. Schalick has written about the emerging field of study in the award-winning Encyclopedia of Disability, for which he is an associate editor.
"Xenodisability is a field with rich potential for increasing our understanding of the meaning of disability," he says.