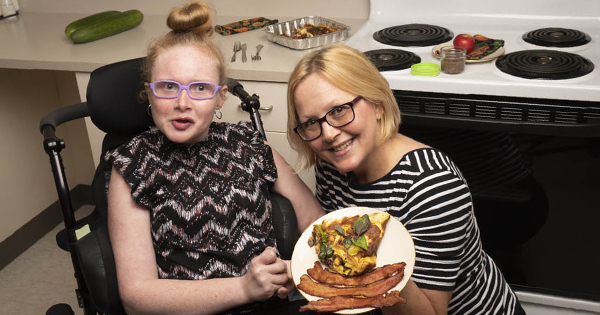 When Heidi Gonzales talks about how the ketogenic diet has helped her daughter, Brandi, one word comes up over and over: miracle.

“It’s a miracle, and I just wish I would have tried it sooner,” Heidi says.

Brandi was born with Rett Syndrome, a rare genetic disease that only affects girls because it comes from a mutation on the X chromosome. (Boys with the disease die shortly after birth). Brandi has the most severe form of the disease. Seizures are one of the symptoms.

“She didn’t have her first seizure until she was 3, and they were mostly under control until around age 10 or 11,’’ Heidi says.

From there, Brandi’s seizures kept escalating and she tried, and failed, to control them with at least four different medications. She had a vagus nerve stimulator (VNS) implanted, and that failed to stop the seizures. By her later teen years, she was frequently hospitalized with status epilepticus, a condition of unrelenting seizures.

Brandi was transferred from the hospital in her hometown of Beloit to St. Mary’s in Madison, where doctors worked for hours to end her life-threatening seizures. Her doctor commented that the next time, the seizures might be fatal.

“We were desperate, and we had run out of options,’’ Heidi says, when her daughter’s doctor suggested making an appointment with Dr. Elizabeth Felton, an epilepsy neurologist at UW Health who specializes in the keto diet. Heidi had heard of the diet, and of girls with Rett Syndrome who benefited from it, but she doubted that anything as simple as a diet change could help where the strongest medications and electrical implants didn’t.

They left Dr. Felton’s office with a keto diet starter kit paid for by Lily’s Fund, a local epilepsy charity. Inside the bag, she found recipes from the keto diet cooking classes offered by UW Health; educational materials; cookbooks; ketone test strips; ketogenic product samples donated by companies; and molds for “keto fat bombs.” These are one of Brandi’s favorite treats and feature healthy fats such as peanut butter and cream cheese flavored with cocoa and no-carb sweeteners.

After going on the modified Atkins diet, which allows 20 net carbs a day, in December 2017, Brandi is nearly seizure free and has reduced two of her four seizure medications by half. Again, that word from her mom: “It was a miracle. I never expected that much improvement.”

Heidi Gonzales went on the diet with her daughter and has lost 20 pounds and finds that it helps with her type 1 diabetes.

“I feel mentally sharper, and she is, too. She’s much sharper,’’ Heidi says.

Her daughter has reached age 20, an age that many girls with Rett don’t make. She’s still walking, with assistance, can sit up and can still eat without a feeding tube. Her favorite foods are zucchini lasagna and low-carb pizza made on low-carb flat bread. Heidi says the high-fat diet meshes well with her southern cooking background – a little bacon on green beans makes them even better.

“I feed her lots of fats, but Brandi hasn’t had any side effects,’’ Heidi says. “I never expected so much improvement.”

Want to learn more about the ketogenic diet?