Ironman Wisconsin Medical Director is an Ironman Himself

Ironman Wisconsin Medical Director is an Ironman Himself

In and around Madison 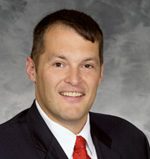 "I guess working medical in a tent was something that I was used to," joked Dr. Faucher, a 17-year veteran of the Air Force.

"Actually, my former colleague Michael Schurr asked me to help out and it was a chance for me to do something in and for the community outside of what I do every day," said Faucher, a UW Health surgeon who specializes in the surgical treatment of trauma and burns.

The Ironman Wisconsin medical tent is staffed by around 200 volunteers; each working 4-hour shifts, and treats an average of 400 patients a year. Treating around 400 people in about a day from a tent might seem a hard enough feat to accomplish, but after six years as a volunteer, Dr. Faucher had a new challenge in mind: Becoming an Ironman finisher.

"I kind of had the itch for a while," Dr. Faucher said. "Finally, my kids got a little bit older and I asked my wife and she said I could."

Only one other major hurdle remained. He needed to learn how to swim.

"I guess I could have kept myself alive if I was in the water prior to training," Dr. Faucher said. "But I never knew how to swim and breathe at the same time. Once I found out that I could swim, that I could train, I signed up for September 2011." 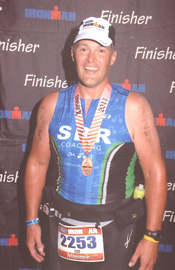 For the next year, Dr. Faucher would get up at 3am each day. The early mornings were tough, but allowed him to train without sacrificing time with his family.

And all the years of volunteering for the event provided Dr. Faucher with some ideas for his own training as well.

"It's not that you just train to run, or train to swim or train to bike," continued Dr. Faucher. "You actually need to train to rehydrate and train to give yourself nutrition, too. That needs to be part of it."

And after a year of early-morning training, Dr. Faucher's persistence paid off. He became an Ironman finisher.

"I was ecstatic at the end," Dr. Faucher said. "I ran too fast through the finish line, though. I should have soaked it up even more. The amount of cheering that is going on is just fantastic. To realize you accomplished something like that is a pretty good feeling, so you need to let it soak in."

In his role as medical director of the event, Dr. Faucher has treated second-place finishers and last-place finishers, professionals and amateurs, finishers and non-finishers. Along with his experience training for and completing the Ironman Wisconsin, he's assembled some tips that he shares with competitors.