In the Lab and in the Clinic, Mario Otto is Fighting Childhood Cancer

In the Lab and in the Clinic, Mario Otto is Fighting Childhood Cancer 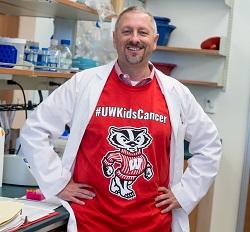 Cancer therapy always moves toward a common goal: aggressively targeting harmful cells while sparing the normal cells, and curing the patient without immediate or lasting side effects. Reducing side effects is perhaps even more important in pediatric cancers because a child’s healthy cells, like cancer cells, are actively growing. And a kid who beats cancer is likely to live longer as a survivor than an adult survivor.

Mario Otto, MD, PhD, is a pediatric oncologist at the UW Carbone Cancer Center and American Family Children's Hospital who treats patients as a physician, providing the most effective, least toxic therapies he currently can. But he is also a researcher who develops and tests new therapies for pediatric cancers in the lab and looks to move them from bench to bedside.

For example, Otto is leading a first-of-its-kind clinical trial here based on technology that he developed as a postdoctoral fellow. The trial provides childhood cancer patients with life-saving stem cell transplants in a way that restores their full immune system more quickly, helping boost their ability to fight both cancer and infections and resulting in reduced hospitalization times.

Now with his own lab at UW, his research group is developing what he hopes will translate into the next clinical trials and eventual standard therapies for childhood cancers.

"One of the biggest challenges in cancer research is having a good pre-clinical model where you can test in the lab what you would like to later evaluate in patients," Otto said. "What we see in mice is not always what is seen in humans, so we need to develop more reliable models."

The Otto Lab is developing humanized mouse models, meaning they provide human blood stem cells and immune cells to mice that have been genetically engineered to lack their own immune system. Then, they give the mice cells from human cancer cell lines such that the mice develop cancer.

"We want to develop this humanized mouse that carries a human tumor and use this model as a platform to study any type of immunotherapy," Otto said. "We can then pre-clinically evaluate how to influence the immune system to recognize cancers, and we can study how to combine immunotherapies with existing chemotherapies and other cancer treatments."

Otto also knows that those existing, traditional therapies have room for improvement. He looks to a successful treatment for some cases of neuroblastoma, known as MIBG radiotherapy. In it, high doses of radioactive iodine are incorporated into a chemical, MIBG, that specifically targets and kills neuroblastoma cells but causes little toxicity to healthy cells. While not all cancers have a cancer-specific target like neuroblastoma does, Otto instead looked to find targets that almost all cancer cells have, allowing him to broadly target many different types of the disease.

"Cancer cells have many more structures, called lipid rafts, on their surfaces compared to normal cells," Otto said. "In collaboration with Dr. Jamey Weichert's group at UW, we are evaluating a molecule called CLR1404 that enters cells via those lipid rafts and is taken up very specifically by cancer cells compared to healthy cells."

CLR1404 can also be made with radioactive iodine, meaning it can be used in radiotherapy similarly to MIBG. Preliminary studies are showing that many different types of pediatric and adult cancers take up CLR1404.

"There are only about 15 centers nationwide that are equipped to offer this type of pediatric cancer treatment,” Otto said. “Our expectation is that we can come up with a clinical trial using radioactive CLR1404 to treat a variety of pediatric tumors."

Otto has recently received prestigious national honors. He is part of UW’s Pediatric Cancer Dream Team, as recognized by Stand Up to Cancer, the American Association of Cancer Researchers and the St. Baldrick’s Foundation. He is a Hyundai Hope-on-Wheels Pediatric Cancer Research Scholar and was also recently awarded a 3-year grant from the Cannonball Kids’ cancer Foundation (CKcF) to continue his clinical trial work.