Improving Cure Rates for Children with Difficult to Treat Cancers

Improving Cure Rates for Children with Difficult to Treat Cancers 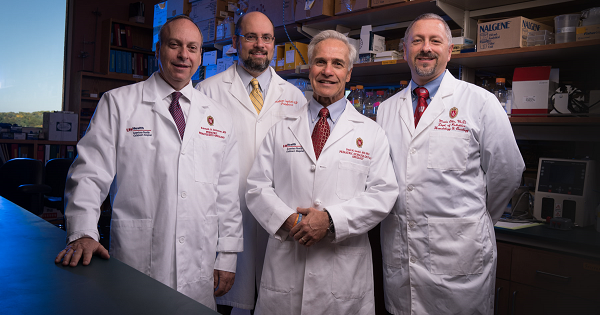 Childhood cancers are relatively rare – they represent less than one percent of new cancer cases each year. They are also often highly curable, as an estimated 85 percent of children with cancer will be cured of their disease.

“But it comes at a price, especially if we have to use multiple treatment modalities like chemotherapy, radiation or bone marrow transplant. Children often develop side effects later in life,” says Ken DeSantes, MD, chief of the pediatric division of hematology and oncology at the UW Carbone Cancer Center and American Family Children’s Hospital.

Some children, such as those with high-risk neuroblastoma, receive all these treatments and more, and yet the disease still has only a 50 percent cure rate.

Twenty years ago, DeSantes came to the pediatrics department at the University of Wisconsin-Madison because of its reputation: Paul Sondel, MD, PhD, was pioneering work in the field of immunotherapy – boosting the patient’s own immune system – to treat childhood cancers.

“There weren’t very many people excited about that field back then. But I was, and Paul was,” DeSantes says. “Then we recruited other physician-scientists – Christian Capitini, MD, and Mario Otto, MD, PhD – whose research and clinical interests would dovetail with our own. Now we have a critical mass of people that build off each other and make our research programs grow.”

The goal with immunotherapy is both that cure rates will improve, and that doctors can reduce or eliminate the need for treatments such as chemotherapy and radiation. However, many current immunotherapies come with different toxicities. Stem cell transplants, for example, can lead to a condition where the T cells from the donor’s immune system also attacks the patient’s healthy cells, sometimes leading to death.

DeSantes and his colleagues are pushing for safer, but still highly effective, treatments. Two such trials are currently open at American Family Children's Hospital, with more in the pipeline.

In one trial, led by DeSantes, a type of immune cell, the natural killer (NK) cells, is isolated and expanded from the blood of a biological parent (their immune system is a half match). Patients with relapsed or refractory neuroblastoma receive those cells plus an immune molecule that helps the NK cells recognize and specifically target neuroblastoma cells. Because NK cells do not have the same specificity or longevity as T cells, the risk of attacking healthy cells long-term is greatly reduced.

Another trial, led by Otto, also seeks to reduce the potential harm caused by donor T cells by isolating only a subset of T cells that still attack the cancer cells, but have much less potential to damage healthy cells. It is open to children with relapsed leukemia or very high-risk, relapsed or refractory solid tumors.

“We are doing these trials with the hope of improving the cure rate for children with difficult-to-treat cancers,” DeSantes says. “Many of these trials are first-in-child, and they’re not currently available anywhere else in the world.”