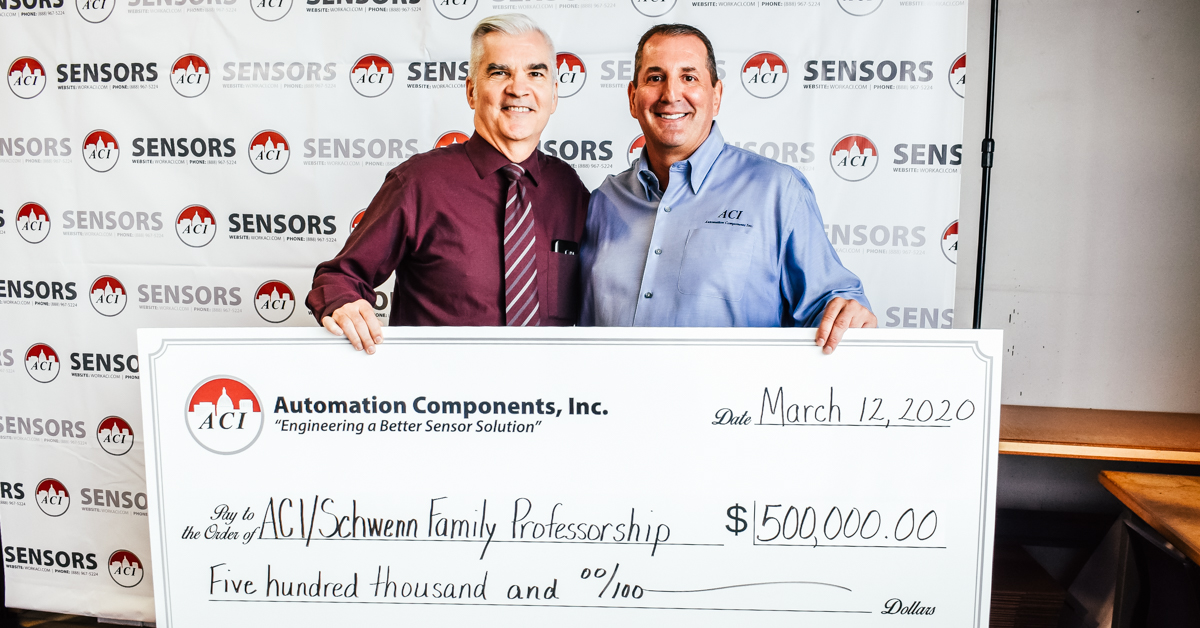 After a five-year fundraising campaign, and a little help from a generous matching gift, the UW Carbone Cancer Center has a new named professorship, and along with that, research funds that will benefit colon cancer patients for years to come.

The new ACI & Schwenn Family Professorship was made possible by Troy Schwenn, and the employees of his company Automation Components, Inc., based in Middleton, Wisconsin. A current University of Wisconsin professor will be officially given the title later this year.

While giving back has always been at the core of his company, Schwenn’s decision to raise funds for cancer research at UW Carbone was a deeply personal one.

In 2007, his wife Mindy was diagnosed with colorectal cancer. Thanks to a fighting spirit and the treatment she received UW Carbone, she was able to live with the disease for several years.

“Mindy was probably one of the kindest, gentlest people that you’d ever want to meet,” Schwenn said. “I was lucky enough to be married to her for 26 years and she inspired many people, including me.”

Despite the treatment successes, Mindy Schwenn lost her life to the disease in 2014. She was 47.

During the years before and after her diagnosis, both Troy and Mindy supported colorectal cancer research at UW Carbone, often through participation in the center’s signature spring event, Bowlin’ for Colons. But after her passing, Troy wanted to do more.

“I don’t think Mindy could have made it as long as she did without the care that we received at the Carbone Cancer Center,” he said. “We wanted to do something to honor her memory, and I think this professorship will be a lasting way to do that.”

After initial discussions with the UW Foundation about how to best support cancer research at UW Carbone, the idea came up for the named professorship. Schwenn then learned that if he could raise $500,000, the Morgridge Family Foundation, a charitable organization with deep Wisconsin ties, would match that gift with a half-million of its own.

“That just made it a no-brainer for us,” Schwenn said.

A five-year campaign was launched to raise the half-million, and Schwenn decided to tie the fundraising to the company’s annual bowling party. While Schwenn covers the cost of the bowling and food, he asks his employees to chip in some money for cancer research. “We ask everybody to try to raise at least $50,” he said. “Most everybody donates a heck of a lot more than $50.”

Schwenn also added extra incentive for his employees to give. “ACI matches everybody’s donations, and then I personally match it,” he said. “So every dollar they put in is matched two more times.”

All of that paid off, and after five years, the company was able to present UW Carbone with a check for $500,000 in March. With that, the wheels were officially put into motion to get the professorship off the ground. That money will be invested into a fund, with interest from the fund doled out on a yearly basis to the person who holds the professorship to fund research. The benefit of this model is that the money will be available year after year.

“This professorship literally goes on forever and will create lasting impact,” said Howard Bailey, MD, director of the UW Carbone Cancer Center. “Long after the person in this role retires, a new person will step in, and if we’ve already cured colon cancer at that point, they’ll focus on another aspect of cancer research. On behalf of everyone at UW Carbone, we thank ACI for this incredible gift.”

And finding a cure is exactly what Schwenn hopes this all will accomplish. While he’s grateful to UW Carbone and the Morgridge Family Foundation, he’s extra grateful to his employees for going the extra mile and making this dream a reality.

“I want people to know just how proud I am of everybody for getting behind this, and how proud Mindy would be to know that everyone really rallied behind her and this cause,” he said. “Hopefully, we’re going to make a difference.”