Honoring a Wisconsin Hero at the Carbone Cancer Center

Honoring a Wisconsin Hero at the Carbone Cancer Center

The award, bestowed once every month since January, 2012, marks the efforts of state residents "eager to go the extra mile, take a stand for causes in which they believe, and use their time, effort and ideas to help make Wisconsin a better place."

Niendorf's involvement in research fundraising began when his son-in-law, Brian Pochel, was diagnosed with pancreatic cancer in 2006. Though only 6 percent of people with pancreatic cancer survive even five years, and nearly three-quarters die in the first year, Brian fought for five and one-half years before succumbing in September, 2011. He was 43 years old. 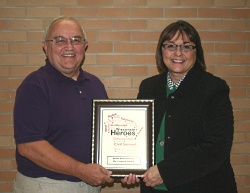 The Task Force's goal is to raise $10 million in 10 years to support pilot research projects, develop permanent research space within the Wisconsin Institutes for Medical Research, and recruit and retain researchers.

"I've said for a long time now that we have some of the best cancer researchers in the world right here in Madison," Niendorf said.

"Ron had wonderful things to say about the treatment his son-in-law received here at the Carbone Cancer Center," said Listug, who serves as the Task Force's coordinator and nominated Niendorf for the award."Over the last two years we've been able to recruit people who are passionate about this terrible disease, and we've made some significant headway. Without Ron, we wouldn't have been where we are today."

With a goal of establishing a durable fundraising activity, Niendorf organized a fundraising bike ride in Verona this past summer, and deemed this inaugural effort a success.

Niendorf is already planning a second ride for next spring, and  believes establishing connections with people who have lost friends and family members to pancreatic cancer will ensure long-term success.

"We want to encourage people who have been affected by pancreatic cancer to commit to donating money every year," he said. "The only way this research will be ongoing is if the funding is ongoing. We need to stay in contact with those who have been left behind."