Heartburn or GERD? When in Doubt, Let the Doctor Decide

Heartburn or GERD? When in Doubt, Let the Doctor Decide 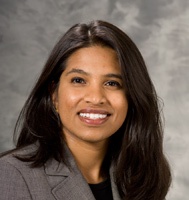 Madison, Wisconsin – You awoke early last Sunday with heartburn that you blamed on the black bean and spicy chicken burrito ordered the previous night at a Mexican restaurant whose Yelp reviews involved the word "sketchy" an alarming number of times.

The pain subsided with a couple of TUMS but returned a few hours later, and again the next day. Should you be concerned?

With your choice of weekend dining? Perhaps.

That your heartburn may signal a more worrisome digestive health issue, like gastroesophageal reflux disease (GERD)? Not necessarily, says UW Health Digestive Health Center gastroenterologist Sumona Saha, but it's worth keeping an eye on.

In a given year as many as 60 percent of people in the United States will experience some symptoms associated with GERD, and one-third of those will have weekly symptoms, according to Healthcare Cost and Utilization Project (HCUP) research.

"Heartburn is such a common symptom," Dr. Saha says. "Almost everybody has experienced it at some point."

Which, along with the abundance of accessible remedies, can make it easy to tolerate, if not ignore.

"There are so many over-the-counter ways to deal with it, from TUMS to Maalox," Dr. Saha says. "Some medications that used to require a prescription - what we call H2 blockers, like Zantac - are now available."

These medications can be an effective way to deal with the pain, but the relief they offer may be temporary and, if heartburn or acid reflux is resulting from a more severe gastrointestinal condition, may provide a ready excuse to avoid the doctor's office when a trip is warranted.

"One of the reasons some people don't seek medical attention is they 'trial-and-error' different over-the-counter medications and try to get their symptoms under control," Dr. Saha says. "Some patients wait for years before they come to see us."

It doesn't take years for something like acid reflux to blossom into serious health concerns. Persistent reflux, wherein food, acid and digestive juices flow back into the esophagus, can lead to painful irritation and inflammation, known as esophagitis. And untreated esophagitis may cause scar tissue to form, narrowing the esophagus. These esophageal strictures can make eating difficult and painful, and necessitate dilation to stretch the esophagus back out or the placement of a stent to open the esophagus.

"If symptoms are not well-controlled, we can sometimes see complications," Dr. Saha says, and adds that for many stricture diagnoses, "if we had seen them earlier on and treated them aggressively, it's something we would have been able to prevent."

Dr. Saha suggests scheduling an appointment with a primary care physician if the aforementioned symptoms linger for a couple of weeks, or if any "red flag" symptoms arise, including unintended weight loss, fevers and bleeding. PCPs can determine whether that burrito-inspired heartburn is a fleeting bother or the sign of a bigger problem worthy of a referral to Dr. Saha or one of her colleagues.

And if you're tempted to roll the dice with Zantac and a self-diagnosis based on 45 minutes of Internet research?

"There are a lot of limitations to what Dr. Google can provide," Dr. Saha cautions. "When you're trying to manage things on your own, you sometimes lose the big picture. That's the doctor's job – to put together all of the pieces of the patient's medical history and come up with the right treatment plan."