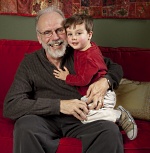 Madison, Wis. - A southern boy at heart, Palmer Bell moved from Tennessee to Wisconsin to be closer to his daughter. He joked that he "liked the idea of having her close, to take care of me in my old age."

As it turned out, his move brought him to the medical experts he needed to battle Barrett's Esophagus, a precancerous condition Palmer lived with for more than 30 years.

Dr. Gopal performed endoscopic ultrasound (EUS) to rule out an invasive cancer, followed by an endoscopic mucosal resection (EMR) where he removed the precancerous nodule within the Barrett's esophagus. After he healed, Dr. Gopal treated Palmer with HALO Radiofrequency Ablation (RFA) 360, a relatively new treatment option for patients with Barrett's esophagus.

The HALO 360 procedure uses a balloon catheter that delivers bursts of heat-energy in a very precise and controlled circumferential manner to remove pre-cancerous cells in the esophagus. The suspicious areas are ablated, or destroyed, without damaging the lining or underlying structure, thus protecting the healthy tissue and cells.

Two months later, Dr. Gopal performed a procedure using HALO 90 RFA ablation, in which a slightly smaller probe is used to treat any remaining areas of Barrett's tissue. With the completion of that treatment, all of the precancerous tissue in the Barrett's esophagus was removed. This means that Palmer's risk of developing esophageal cancer in the future, and the likelihood he will redevelop Barrett's esophagus, are significantly reduced.

"Our team has been performing approximately 30 to 40 cases annually since 2007," said Dr. Gopal. "We are the region's most experienced advanced procedure specialists, and we're seeing excellent success with this treatment."

Palmer has also dealt with esophageal spasms and gastroesophageal reflux disease (GERD). He once again partnered with Dr. Gopal for treatment and relief from symptoms.

Having undergone more than 20 endoscopies in his 60-plus years, Palmer reflects on a lifetime of Barrett's esophagus.

"I know it's there, and I just keep hoping it doesn't bite me. I will continue to listen to my doctors, take my meds and make sure it doesn't," says Palmer.

Dr. Gopal will continue to monitor Palmer. Although relatively new, UW Health outcomes using this combined non-invasive technology of EMR and radiofrequency ablation have shown a strong success rate for patients with Barrett's esophagus and precancerous or early cancerous lesions.

"Palmer should have a very healthy and productive life with his grandson and the rest of his family, and although we will continue to keep a close watch for any redevelopment of precancerous lesions, given his recent successful treatment and biopsy results, he should do very well," said Dr. Gopal.