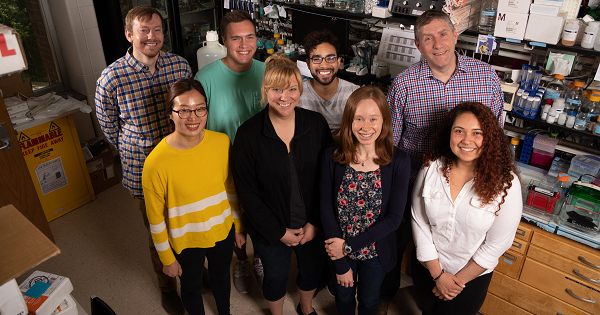 When viruses – tiny packages made of proteins that envelop DNA or RNA – infect humans, they can cause the mildest colds to the gravest influenza pandemics. But beyond the illnesses commonly associated with viral infections, viruses can also trigger different cancers.

“We’re swimming in viruses, we get infected with some viruses quite frequently, causing colds or the flu. Most of them do not cause cancer. But every now and then something goes wrong,” says Nate Sherer, PhD, a molecular virologist at the McArdle Laboratory for Cancer Research.

Sherer, who has been a member of the UW Carbone Cancer Center since 2011, and his team use advanced microscopy techniques to watch how viruses interact with living cells in order to better understand the machinery and pathways that govern viral infections. His research largely focuses on HIV – human immunodeficiency virus.

Although HIV is not thought to directly cause cancer, HIV-infected individuals are at higher risk for many cancers. Insights gained through his work will help guide the development of better treatments for cancer viruses, such as human T lymphotropic virus and hepatitis B virus, which cause leukemia and liver cancer, respectively.

“There’s a perspective that with effective vaccines and antiviral therapies, we could someday prevent or cure at least 20 percent of all human cancers,” Sherer says.

By tagging virus components with proteins that emit different colors of light, Sherer and his team watch viral RNA and new virus particles be trafficked around a cell in real time under a microscope. The colorful movies generated by these studies reveal complexities normally hidden from human eyes.

“We use microscopy to try to see the nuts and bolts of how viruses get into cells, how they express their genes, and how and where they make new virus particles. We’ve developed tools that allow us to see as many different components of HIV as possible in a single cell and track what it does over the entire infection cycle,” Sherer says.

“Using these systems, we can start to make mutations in the virus or treat the cells with drugs and watch how those changes affect infection.”

These microscopic movies can also reveal unexpected behavior. For example, before Sherer’s studies, it was believed that HIV RNA left the cell’s nucleus in discrete packets over a long period of time. Instead, Sherer and his team recently identified an RNA “burst.” They have recently awarded a grant to study why it happens and what cell components are involved.

“At this stage, the project is pretty nitty gritty cell biology, but the hope is that by identifying these pathways and the proteins involved, we can turn the system on its head and discover new therapeutic approaches to treating all kinds of viral infections,” Sherer says.