Going Bald for a Good Cause: Shave to Save

Going Bald for a Good Cause: Shave to Save

See more photos from the event on our Facebook page. 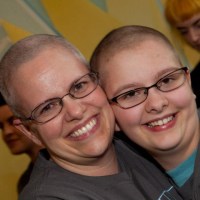 Madison, Wisconsin - When the idea was first suggested – asking individuals to raise donations in order to get their heads shaved – there were skeptics. But any doubts were soon quelled by the overwhelming response that followed.

In its first year, Shave to Save raised nearly $32,000 and saw more than 50 individuals get their heads shaved. All proceeds were split evenly between the University of Wisconsin Carbone Cancer Center and American Family Children's Hospital.

Shave to Save was the idea of Erin McCarthy and Rachel McMahon, cytotechnologists at UW Hospital and Clinics. While other similar events benefit national organizations, McCarthy and McMahon wanted to do something that directly benefitted the community.

"My mom is a three-time cancer survivor who has been treated at the UW Carbone Cancer Center," explained McMahon.

While McCarthy no longer works at UW Hospital and Clinics, she maintains strong ties with McMahon and faculty and staff at the UW Carbone Cancer Center. She shared that, "As cytotechnologists, we read the specimens to give the cancer diagnosis. We both wanted to do something to help make a positive difference in the lives of patients and their families."

Participants signed up to raise funds beginning in January 2013, and their efforts culminated in a public head shaving event held in the lobby of American Family Children's Hospital on May 3. Local news anchors Leigh Mills and John Stofflet from NBC-15 emceed the event.

As everyone gathered in the lobby, Dr. Diane Puccetti, pediatric oncologist at American Family Children's Hospital, addressed the crowd.

"Cancer affects everyone," she said. "It involves friends, family and the community. We're so very grateful for the support of everyone who has been involved with this event."

The only two requirements for participating in Shave to Save were individuals had to commit to getting their heads shaved, and had to raise funds by asking friends, family, coworkers and others to support their efforts.

The top fundraiser for the event, Britt Schuldes, was the first to get her head shaved. When asked what the secret to her success was, a friend in the crowd shouted jokingly, "Constant badgering!" to many laughs. Schuldes, like several others participating in the event, also donated her hair to Locks of Love.

Several UW Health employees, including nurses, therapists, physicians, even staff from the Culinary Services Department, were represented among the "shavees." Jackie Arneson, a phlebotomist at UW Hospital and Clinics and her son Greysen were among the participants. Greysen was the youngest "shavee" of the day. As to her reasons for participating, Jackie explained, "My aunt passed away from cancer in 2009. And honestly, I'm grateful that my son is healthy and I think it's important we try to make a difference when we can." 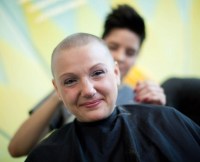 "My cousin and I were close," she commented. "And she died from melanoma when she was only 25 and left behind two children only two and five years old."

For others, like the Campbells, the event was a family affair. Bethaney, a Bone Marrow Transplant Coordinator at UW Hospital and Clinics, her teenage daughter and husband all got their heads shaved. As her husband Curt explained, "The women in my life have serious guts, so I'm here to support them."

For the UW Carbone Cancer Center staff members who participated, many acknowledged it was the patients they work with every day who truly inspired them and for whom they wanted to make a difference.

While McCarthy and McMahon knew the event could be successful, they acknowledge it was the incredible support of friends, family and colleagues that truly helped make it a success.

"There's been such tremendous support from within UW Health, and among those whose lives have been affected by cancer," explained McCarthy. "One family traveled all the way from Escanaba, Michigan to participate. It's truly been amazing to hear their stories and to see everyone gathered for such an important cause."