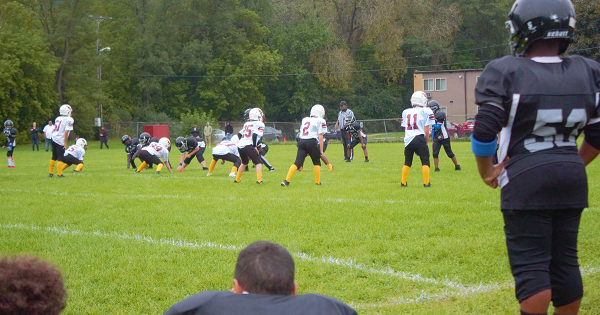 Madison, Wisconsin - For nearly 50 years, silver and black have been the team colors of the Southside Raiders.

While the Madison-based youth football team isn’t planning on a radical redesign of their iconic helmets and jerseys anytime soon, they have been trying out a new color recently: blue.

Raiders players, coaches and even the cheer squad donned blue wristbands last week, in observance of Prostate Cancer Awareness Month. Each wristband carries the logo of the UW Carbone Cancer Center, a world leader in the area of prostate cancer research.

The wristbands were handed out during last week’s practices and were worn during the team’s games on Saturday, September 28.

For Raiders co-director Isadore Knox, the “Go Blue” campaign is a personal one. Knox is a prostate cancer survivor, and now works to raise more awareness about the disease, as well encouraging men – especially African-American men – to get checked.

“We know how important screening for prostate cancer is, particularly in the African-American community,” Knox said.

A 2017 report from the UW Cancer Health Disparities Initiative found that African-American men in Wisconsin are 71 percent more likely to be diagnosed with prostate cancer - and die of it - than white men in the state.

Through partnerships with organizations like the Southside Raiders, the Carbone Cancer Center is working to improve outcomes for all individuals with cancer. Knox says that the Raiders organization is well-suited to do outreach, not only because they have a significant following after decades in the city, but also because the program is primarily made up of African-American players, families and coaches.

While it’s the kids that are wearing the wristbands, the educational aspect of the campaign is primarily targeted at the adults. With home games often drawing 200-300 fans to Madison’s Penn Park, that outreach can go a long way. Knox says he’s also planning a parent meeting for this week to talk about prostate cancer with individuals and families who couldn’t attend Saturday’s games.

Even though the football season is winding down, Knox hopes this is just the first step of a broader awareness campaign. First and foremost, he’s encouraging the players to keep wearing the wristbands throughout the rest of the season, which ends in October. That is, if the kids – we’re talking about fourth through eighth graders here – can hold onto them for a couple more weeks.

There are also plans to partner with other organizations on the south side of Madison, and beyond, to keep raising awareness.

“Hopefully, this can be the beginning of a more sustained and regular focus on prostate cancer,” Knox said.