UW Health Fitness Expert Shows You How to Return to Exercise

UW Health Fitness Expert Shows You How to Return to Exercise 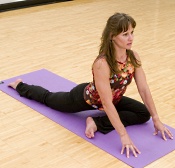 Did a hectic holiday season demolish your exercise routine? Or did you wake up on January 1 and resolve to get back in the gym you've been avoiding for months (or even years)?

You're not alone. Decembers filled with holiday parties and Christmas cookies lead to January resolutions to shed the extra pounds by sticking to the exercise habit that too often has proven elusive in the past. But lives are busy and time is short. How can you make sure this New Year's fitness resolution is more than just a memory come February, March and April?

Bock is a four-time Ironman Triathlon finisher who trains experienced triathletes, runners and other serious endurance athletes. But she also teaches classes like Senior Weight Training and Power Flow Yoga that are geared more toward people who exercise to stay healthy and trim but don't necessarily want to be able to run 26.2 miles in two and one-half hours flat.

Bock understands that these are the people who often abandon exercise routines during the hectic Thanksgiving to New Year's corridor.

"Through the holiday season, because of the parties and the family dinners and the treats people bring into work, on average people can gain five or six pounds," she says. "It's an indulgence we have every year and because things get kind of crazy, exercise is the first thing to go."

But it doesn't have to go for good. Bock offers a three-pronged approach for people who are looking to hop back on the fitness wagon.

A January weigh-in that reveals those five or six excess pounds can provide some serious motivation, but Bock cautions against adopting an overly ambitious exercise plan. Bodies that aren't used to working out need to be eased into a routine.

"A lot of people just want to go run, but it's a lot of impact on your joints," Bock says.

Rather than bolting from the couch and running three to five miles, Bock suggests alternating periods of running and walking.

"Walk for two minutes, and then jog for one minute," she says. "Repeat (that sequence), and gradually increase the running time and decrease the walking time."

It's also important to pay attention to how your body responds to the exercise.

"It may feel easy while you're doing it," Bock cautions, "but the next day or two you may feel a bit of soreness. Give yourself some time before you start ramping it up."

And when you do ramp it up, do so in the knowledge that there is a difference between exercise that is challenging and exercise that is painful to the point it invites injury. Know and respect your limits, Bock says, and "if it doesn't feel right or is painful, definitely step back."

Late hours at work, the kids' thrice-weekly hockey practices, the book club to which you committed...days fill up pretty fast. Exercise has to fend off a multitude of interests competing for your time, so Bock suggests getting it on your calendar and keeping it there.

"Schedule it like you would a meeting or plans with friends. Your time is important, too. It's just as important to have that time for yourself and do something that makes you feel good."

Gym memberships surge in January, but before signing that contract, make sure your commitment will justify the expense. Bock's solution? Join a class that meets a few times per week.

"Before committing to a full membership, sign up for a class that meets one to two times a week and see how consistently you attend," she says. "Then move into the membership if you can make time for it, so you're not paying for something you're not using."

Sure, running is good for you. But if you hate running, its benefits will likely be mitigated by the fact that you'll search for every excuse not to do it.

Of course, some people don't like exercise in any shape or form. (We can see you back there, trying to hide behind the Nautilus machine.) For the exercise-phobic Bock suggests a little bit of everything to keep the session fresh.

"If you have a facility you can go to, try the rowing machine for 10 minutes, and then maybe a run or brisk walk for another 10 minutes," she says. "You get an overall longer workout than with any one particular thing you might find boring. Anything is do-able for 5 or 10 minutes."

Strength training, which Bock says is particularly important for women as it helps with increasing bone density, is a viable option because of the wide variety of options it offers.

"Whether it's using body weights or hand weights or tubing...there are a lot of different ways you can incorporate strength training," Bock says. "That's always important."

You can also enlist the aid of a workout buddy to help your exercise time pass more pleasantly and keep you on track.

"It's easy to back out on yourself and say, ‘Oh, I'll do it later,'" Bock says. "But if you know that other person is committing the time, too, it gives you that little extra push."