One clinic, however, stayed open. Generations Fertility Care had a patient scheduled for an egg retrieval that day, and as UW Health infertility and reproductive endocrinologist Christina Broadwell, MD, notes, "ovulation waits for no one."

With chances low that anyone would be able to drive that day, the team (Dr. Broadwell, UW Health embryologist Lynn Boehnlein and UW Health anesthesiologist Joel Johnson, MD, PhD) and the prospective parents, Julie and Tony Chang, checked into a hotel across the street from the clinic the night before. The next morning, they waded through the drifts to get to the clinic, where UW Health nurses Megan Bawden, RN, and Kirsta Johnson, MA, had arrived in Johnson's four-wheel-drive SUV to help with the procedure.

Five days later, on Christmas, the embryo was ready for transfer into Julie's uterus, so UW Health infertility and reproductive endocrinologist and division director Dan Lebovic, MD, did the transfer, assisted by UW Health nurse Jen Spredemann, RN. Nine months later, on September 23, 2013, baby Matthias Chang arrived, a miracle like every baby, but with a story that will likely be told again and again.

"We feel extremely blessed and thankful for the above and beyond care we received at Generations,'' says Julie Chang. 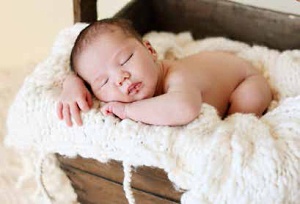 But Dr. Broadwell says that while giant blizzards aren't the norm, the clinic staff often works on weekends and holidays to time the procedures correctly for maximum success. The Chang's story also highlights another growing trend at Generations: families who opt for the transfer of a single embryo. Julie Chang says that because of her age and their responsibilities to their three older children, who joined the family via adoption, they didn't want the risk of a pregnancy with multiples.

"Our family felt very full and complete already, so while we were very blessed to be able to try for a fourth child, we felt the single-embryo option made the best sense for our family,'' Chang says.