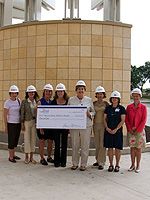 MADISON – A warm welcome awaits the families and visitors who walk through the doors of the new American Family Children's Hospital – thanks in part to a $1 million contribution from Friends of University of Wisconsin Hospital and Clinics.

A fireplace funded by Friends adds a warm glow to the main entrance; at the Guest Depot, families and visitors will get directions, help with hotel accommodations and other "concierge" services they need; and in the Positive Image Center and playrooms funded by Friends, children can find help coping with their illnesses and seek solace in fun hangouts – where kids can just be kids.

With a generous contribution and a mission to help young patients and families feel at home at the new American Family Children's Hospital, Friends is putting its stamp on the new building and its family-friendly spaces.

The Friends donation was made official at a June 26 check ceremony outside the hospital's main entrance, with Friends President Ann Green presenting the $1 million check to UW Hospital and Clinics President and CEO Donna Sollenberger.

Dedicated to Children and Families

Opening its doors at 1675 Highland Avenue in Madison in August, the new $78 million American Family Children's Hospital will be a state-of-the-art pediatric health care facility unlike anything else in the region.

For many families, having a child in the hospital means essentially moving the entire family into the hospital. To meet families' needs, everything about the American Family Children's Hospital is designed accordingly, including larger patient rooms, family kitchens and lounges, and multiple playrooms and lounges for both young children and teens.

The new hospital will also offer a range of new and expanded family and community services, including:

"This is going to be a wonderful place with a lot to offer the children and families in this community," said Friends President Ann Green. "It's just awe-inspiring to think about where the children's hospital has been and where it's going in the future. It's just so fulfilling to be a part of it."

To raise its sizeable donation, Friends of UW Hospital and Clinics held several events and fundraisers, including its "Reach for the Stars" gala in 2005, featuring Apollo 13 commander and astronaut James Lovell.

The Friends 2006 "Go for the Gold" gala featured teammates Mark Johnson and Mike Eruzione of the 1980 U.S. Olympic men's hockey team. Together, the two events raised $625,000 toward the Friends' $1 million pledge to the new children's hospital.

Friends also raised $550,000 from the "Dazzle in Dairyland" CowParade Wisconsin Auction in 2006, reaching its goal for the children's hospital and raising additional funds for local charities.

On February 9, 2008, Friends will hold its "Fathom the Future" gala, featuring underwater sea explorer Robert Ballard, who first discovered the world's most famous shipwreck – the Titanic. Continuing its commitment to the children's hospital, Friends will auction off the rights to name the special procedures playroom at the 2008 gala.

"This is such a hard-working group," Green said of her fellow Friends. "We are grateful to the many organizations, individuals and volunteers that helped us achieve our pledge goal. We are overwhelmed by the generosity of the people in the community to support our efforts."

Sollenberger also praised the Friends' commitment to the children's hospital.

"This contribution will help children and their families in the community and beyond by taking education, service, research and patient care to an entirely new level," Sollenberger said. "This brings us one step closer to having a world-class facility to match our world-class care."

Building a world-class children's hospital is a major financial undertaking. In fact, $41 million of the funds needed to build the American Family Children's Hospital is being raised from donors, combined with $37 million in bonding. An initial $10 million flagship gift came from American Family Insurance in 2003.

All are welcome to attend a Dedication, Community Celebration and Open House for the new American Family Children's Hospital on July 29, 2007, from 1-5pm.