For Chris Draft, tackles and blocks were once the name of the game. But after more than 10 years in the NFL, the former linebacker is now busy drawing up a very different kind of game plan – one that looks to permanently change the face of lung cancer.

November is Lung Cancer Awareness Month, and the UW Carbone Cancer Center is kicking off the month with an all-day event for lung cancer patients and survivors, as well as their family members and friends. Inspiring Hope takes place on Saturday, November 2 at Nakoma Country Club in Madison.

It’s a theme that resonates with Draft, who will be speaking at the event about his personal connection to the disease. 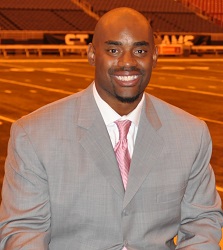 “Hope is something you have to grab hold of, and you need people around you that encourage that,” he said. “That is, with tremendous family and friends that are supportive, but also making sure you have the information and knowledge that it takes to be able to tackle the disease and be confident with it, and that’s exactly what my wife had at the beginning of her diagnosis.”

Keasha Rutledge met Draft in 2006, and a relationship soon blossomed. A professional dancer and nonsmoker, Rutledge appeared to be the pinnacle of good health.

But a diagnosis of Stage IV lung cancer in 2010 set the couple on a new and unexpected path.

The two launched the Team Draft initiative at their wedding in 2011, an effort aimed at raising awareness of lung cancer, as well as countering the narrative that it’s a disease that only smokers can get. “We made a commitment together to each other but also to the lung cancer community,” Draft said.

One month after the couple tied the knot, Keasha Rutledge-Draft lost her battle with the disease. She was 38.

Since then, Chris Draft has traveled the country, visiting cancer centers and using his unique platform as a former NFL player to shine a light on research. “The goal was to build a relationship with our cancer centers and really help them grow their centers, and at the same time, be able to make sure that people understood what they were doing,” he said.

Changing the face of lung cancer means a lot of things to Draft. It means challenging misconceptions about the disease. It means bolstering research and lifting up doctors and patients. It also means telling the stories of those who have survived the disease. “It’s critical that we find our survivors and it’s critical that we embrace them, as we send a message that’s different,” he said.

The Inspiring Hope event will also feature members of Carbone’s lung cancer team, including Narjust Duma, MD, talking about clinical trials, as well as Ticiana Leal, MD, speaking about what’s on the horizon for lung cancer treatments and research.

A full agenda and registration information can be found on the event’s webpage.

Much like winning a football game, it takes a team working together to fight lung cancer. And finding a cure for the disease, Draft says, would be the ultimate team effort. “It would be special not just because we achieved it, but because of all the people that committed to that goal and worked together to get it done,” he said. 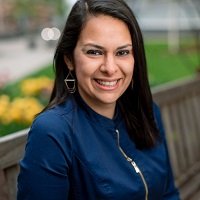 Physician and researcher Narjust Duma, MD, recently joined the faculty at the UW Carbone Cancer Center. Her passion is caring for women with lung cancer and studying the unique challenges they face. She is also committed to raising awareness of the challenges faced by women and underrepresented groups in medicine. Learn more about Dr. Duma through a brief Q&A