Finding Love in Support of a Good Cause

Finding Love in Support of a Good Cause 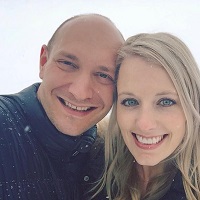 As members of the UW Carbone Cancer Center’s Emerging Leadership Board, Jordan Taylor and Christina McNamara are no strangers to giving back. But they had no idea that when they joined the ELB over four years ago, they would be getting something in return – each other.

This past Valentine’s Day weekend, Taylor and McNamara celebrated their engagement.

The ELB is a network of young professionals that builds community awareness of the efforts and achievements of UW Carbone Cancer Center. Board members are advocates and supporters of the Cancer Center, volunteer at events and host their own annual philanthropy event, Munich to Madison, which raised $25000 in 2015.

“We both have an interest in community involvement and supporting good causes, and that was what led me to be interested in the ELB and helping spread awareness for the Carbone Cancer Center,” Taylor, an attorney at DeWitt Ross & Stevens, said.

“I think everybody knows someone who has been affected by cancer, and I was interested in getting involved with the community and supporting the cancer center in Madison, in our own backyard,” agreed McNamara, who works as an actuary at CUNA Mutual Group. “The ELB is a network of people who all have the same common passion for community involvement and we’ve met some of our best friends here. And, it’s how I met Jordan.”

Joining the board about a month apart from each other, Taylor and McNamara both originally worked on the ELB’s Munich to Madison committee. They do not quite agree on how they met, though. McNamara said that at their first ELB meeting together, members were told to sit with their committee, and Taylor sat next to her.

“No, I saw you and I was wishing you’d join the Munich to Madison committee, and then you did and I was excited,” Taylor said. “That’s the way I remember it.”

The couple jokes that because so many of their friends are ELB members and because the Munich to Madison event kicked off their relationship, they should hold a surprise wedding at this fall’s event. More realistically, though, they are planning a summer 2017 wedding.