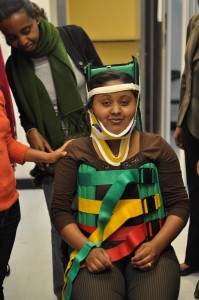 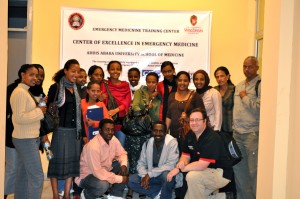 Today was the second day I was teaching nurses–a group of 16 on this day–from the Addis Ababa fire brigade.

I was a little concerned because the group was fairly shy, but once we began the skills stations they became very engaged and talkative, which was great.

As the nurses became more comfortable and candid, they expressed their frustration with the lack of equipment, medication and training in their current practices.

I could relate as I had heard similar complaints in the US from time-to-time, but not on the scale they were talking about. I explained that EMS in the US has a lot of extra equipment, but what they were doing now in Addis is saving a much higher percentage of lives–opening airways, controlling bleeding, basic ABCs–then all the extra equipment would. Once they showed what EMS can do and how important it is, resources will follow.

One of the cultural traditions I experienced today was tea time, which they had once in the morning and once in the afternoon.  They made quite a production of this with a large table of coffee, tea, short bread cookies and barley. They even had someone serving it to you. It was great!