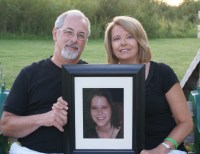 Madison, Wisconsin - Sue Pasewald, a receptionist at the UW Health Horicon Clinic, joins 31 other people who were selected to ride on the Donate Life America float in the 124th Rose Parade in Pasadena, Calif.

Sue is the mother of tissue donor Christina Pasewald. She will ride the Donate Life float in recognition of thousands of individuals who donate each year.

Christina died tragically in 2007. When they were asked about organ, tissue and eye donation, Sue's initial response was "no." Her husband Dave said that this is something Christina would want to do.

Five years later, Christina is not forgotten. She credits the support of her co-workers and staying busy and focused on the patients' needs as a big help to her after Christina's death. Sue and her family keep Christina's legacy alive by actively volunteering to promote organ, tissue and eye donation. Sue maintains a donation display at the UW Health Horicon clinic, has shared Christina's story at community events, staffed donation education event booths and answers questions people have about donation.

"Being nominated and chosen to represent Christina and other donors across the United States is a huge honor," said Sue. "When RTI called to tell me I was chosen to ride the parade float, my first response was: Really? This is just too wonderful!" Sue added "Christina always did things in a big way, and I can't think of a bigger way to carry on her legacy and promote tissue and organ donations."

The 2013 Rose Parade airs at 10am on January 1. The Donate Life America float, titled "Journeys of the Heart" features a collection of joyful hearts representing the new life made possible by transplantation, grounded by a reverent dedication garden filled with roses bearing personal messages honoring those who make the gift of life possible.

RTI Donor Services is sponsoring the Pasewald’s trip to Pasadena. They will be leaving on December 28th. The trip will include float decorating, placement of dedication roses for Christina, attend float judging and various events related to the Donate Life float.