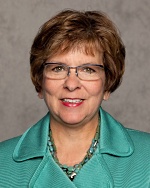 Donna Katen-Bahensky, president and CEO of UW Hospital and Clinics, has been named one of the top women leaders in health care across the country.

Becker’s Hospital Review, a monthly publication devoted to business and legal news about hospitals and health systems, published its list of “130 Women Hospital and Health Systems Leaders to Know” earlier this month.  The leaders were selected by the publication’s editorial team, which looked at factors such as awards the leaders have won and the performance of their hospital or health system.

There are more than 5700 registered hospitals in the United States.

In addition to her leadership of the hospital, Katen-Bahensky serves on the board of trustees of the American Hospital Association, the Greater Madison Chamber of Commerce and the Overture Center Foundation Board.  She has been an active volunteer for the American Heart Association for more than 20 years and has been involved with many non-profit organizations during her career.