Dog Sniffs Out Owner's Cancer for the Third Time

Dog Sniffs Out Owner's Cancer for the Third Time 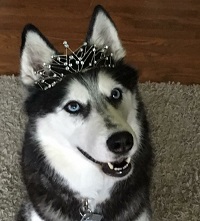 The story about UW Carbone patient Stephanie Herfel and her cancer-sniffing husky dog, Sierra, has gone viral since the Milwaukee Journal Sentinel reported on it in early December.

Since then, the story of how Sierra sniffed out Stephanie’s ovarian cancer has gone around the globe. She’s had interview offers from Dr. Oz, The Now, local television in Madison, and is going to Nashville with her husband, Jim, and Sierra, to tape an episode of the Pickler & Ben show.

“I’m just trying to ride the wave,’’ says Stephanie, who set up a new email account to manage all the inquiries. “My message is to get your symptoms checked out, I hope that I could save another women’s life."

In case you missed it, here’s the short version. Herfel, 52, inherited Sierra in 2011 when her son, Sean Perez, joined the U.S. Air Force. In autumn 2013, shortly after she moved from California to Madison, she started experiencing the whispering symptoms of ovarian cancer, including pain and bloating in her lower abdomen. She went to the emergency room but was told that it was likely a benign ovarian cyst.

“She put her nose on my lower belly and was sniffing me so intently I thought I had spilled food on my shirt,’’ Stephanie remembers.

But then the dog ran and hid, as if she were upset, and curled into a ball in the back of the closet, like she was afraid.

That reaction caused Herfel to get another opinion.

“I would not be here today if she didn’t react like that,’’ Herfel says. “That’s why I made the appointment.”

The second opinion appointment led her to Dr. David Kushner at the UW Carbone Cancer Center. He confirmed that she did indeed have stage 3C ovarian cancer. He did surgery to remove her spleen and a performed a complete hysterectomy. Herfel had chemotherapy, and was doing well until 2015, when Sierra again began sniffing and acting frightened. The same thing happened in 2016, and both times scans confirmed that her cancer had returned.

“Three times is amazing,’’ she says. “It just triples the amazement.”

It turns out that her doctors aren’t surprised to hear that the dog has powers of detection. Dogs have 220 million olfactory receptors in their noses, compared with 5 million for humans, and the part of their brains devoted to smell is also much larger.

“It’s believable,’’ says Dr. Howard Bailey, Carbone Cancer Center director and one of Herfel’s oncologists. “It comes down to proteomics or the study of proteins. Cancer occurs and advances based on some of the abnormal proteins it produces and differing smells are often a result of different proteins. So it’s not surprising that dogs, which are much more sensitive to smell than we are, could detect a change.” 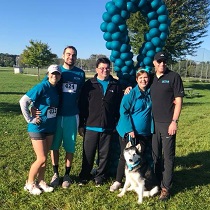 But while Sierra gets credit for the first detection, it’s some cutting-edge research that is keeping Stephanie going.

When her cancer returned in 2016, Dr. Kushner suggested that she enroll in a clinical trial that included of a new type of targeted cancer-fighting drug called a PARP inhibitor. Earlier trials showed these drugs work especially well in patients such as Herfel, who have the BRCA mutation, which is inherited and can drive both ovarian and breast cancers.

PARP inhibitors work by interfering with the cancer cells’ ability to repair their damaged DNA, leading to cell death. The BRCA gene makes those cancer cells especially vulnerable to this class of drugs. Earlier this year they were approved by the FDA, thanks to women like Stephanie who participated in clinical trials.

“That made all the difference in the world to her,’’ says Dr. Kushner. “It’s amazing that one of the first targeted therapy for ovarian cancer became available just as she needed it.”

So far, the drugs are keeping her cancer from progressing.

Meanwhile, Sierra is getting some help at home, too. Herfel says the dog is so attached to her that she would panic, and even have seizures, when Herfel would leave for doctor’s appointments. So the Herfels got her a “little brother,” a little fluffy guy named Gizmo who keeps Sierra company.

“Sierra is so bonded to me,’’ Herfel says. “When I’m sad, she’ll lick my tears off, and she always places herself between me and the doorway, to protect me.”

And now Sierra will be making the rounds of television appearances, and perhaps helping save more women with early symptoms of ovarian cancer.