Media Inquiries
news@uwhealth.org
UW Health Services
Infectious Diseases
Heidi Nass, an outreach specialist and patient advocate for UW Health's HIV/AIDS Comprehensive Care Program, is in Mexico City this week for the International AIDS Conference.
Read more: Addressing the World on HIV/AIDS
Nass is writing "blog"-like accounts from the conference for uwhealth.org. UW Health is pleased to provide a venue for Nass to share her experiences at the conference. The experiences and opinions she shares here are her own and may not represent UW Health's positions, strategies or opinions.
Return to homepage:
Dispatches from the International AIDS Conference in Mexico
Go to previous posting: Day 3

Reflections from the International Women's March

The other day I wrote about my struggle with what it means to "represent" my "community." There's at least 33 million people (more than 16 million women) living with HIV/AIDS in the world, there's well more than a million in the U.S. – if I, as an American woman living with HIV, stand up to give "the community perspective," what does that mean?

It turns out that Frika Chia from Indonesia, a member of the Asia and Pacific Islands Network of People Living with HIV/AIDS, has the same concerns. I attended a session today by positive (as in HIV-positive) leaders from around the world and Frika – wife, mother, activist and 24-year-old woman living with HIV - was among them, speaking to the very challenge of representation.

Frika talked about wanting to put forth the issues to which only openly positive leaders can authentically speak, yet recognizing she is one person with one experience. She talked about the importance of mechanisms to gather community input so that the perspective of the person speaking truly represents that of many others.

"If I am a leader, I am a bridger," Frika said. It's true - any of us who have chosen to live openly with HIV/AIDS and advocate for our communities must be a conduit between those making HIV/AIDS policy for/about us, and the rest of us. It's a big and humbling responsibility, but Frika and the other presenters remind me that I am sharing this path with honorable, courageous people.

¡TODAS LAS MUJERES, TODOS LOS DERECHOS! All women, all rights! That was the message of the international women's march today. You know you're somewhere unique when you are marching through ancient Aztec thoroughfares alongside a Mexican commercial sex workers collective, an Argentinean organization of people living with HIV/AIDS and other groups from around the world whose banners you can't read because they are in languages you don't understand. 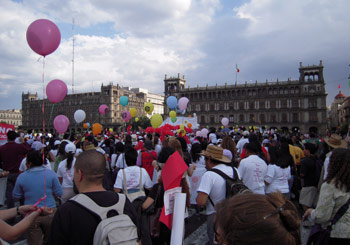 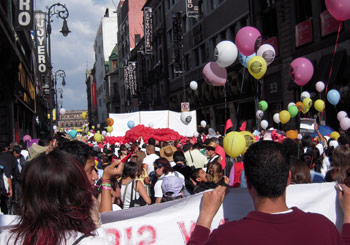 PHOTO (above): International Women's March at the Z*colo, Mexico City

In the many hundreds of women and men crammed into shuttle buses from the conference to the starting point of the march, I was crammed next to a woman from Germany. She was a self-described high-level government health official who was at the conference to present her country's prevention strategy and messages.

She described the HIV/AIDS epidemic in her country as one belonging to men who have sex with men. I asked about women and she said, "Not really, some are discovered in pregnancy care but not many." I thought, just like what people said in the U.S. in the early 1980s.

I asked about the culture of the HIV-positive community and she talked about how open gay people were and that Germany was really quite accepting of homosexuality. I started to wonder why, if all this were true, the epidemic was localized in the gay community.

I asked again about HIV, specifically, and the presence of the positive community – did she know the community leaders of people with HIV/AIDS, for example. "I guess I don't really know any positive people," she said. Berlin, we have a problem.

Unfortunately, this kind of problem is repeated the world over – policies made, strategies created, discussions had without the input and engagement of the very people who will be most affected by them… and who may well be the experts.

Amid the throngs and marching and chanting and dancing, Tariq (my husband) and I ran into two women who were mentors to me when I came out and started getting involved in advocacy a dozen years ago. Rebecca Denison was among the first HIV-positive women leaders and founded an organization by and for HIV-positive women in Oakland, California. It was at a retreat for women with HIV/AIDS run by her organization that I met Dawn Averitt-Bridge, who has been advocating for women with HIV/AIDS since her diagnosis nearly 20 years ago, though she's still shy of 40.

Both Rebecca and Dawn, who each have two beautiful HIV-negative daughters and a loving HIV-negative husband, have made the world a better place for positive women everywhere, and I am personally grateful to them forever. En my vida con VIH/SIDA, estas mujeres son mi familia. 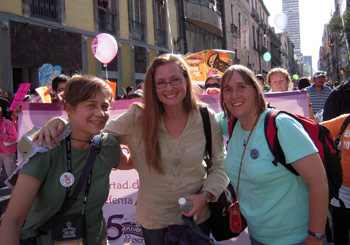 Oh, Annie Lennox (of Eurythmics and solo artist fame) was there, too. Not too long ago she did a whole record about global HIV/AIDS and it's clear that the concerns of women are where she lives. She gave her speech in Spanish, which the crowd loved. 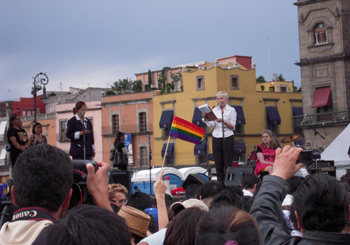 I guess Bill Clinton is here, too, but there hasn't been much buzz about it, which is fine by me. Don't get me wrong – though Clinton was not a leader in the fight against HIV/AIDS while President (one example: Clinton could have legalized needle exchange, a scientifically proven method of reducing HIV transmission for injection drug users, but did not), through his foundation he has become a "player" in the global fight against HIV/AIDS.

The thing is, so many people are doing so much with and for so little on the forefront of this epidemic, yet a famous person can give one speech or donate a speck of their wealth to the cause and it's reason for the media to holler and shout. The day the media takes a sincere and invested interest in this thing is the day we start really making headway.

We talk a lot in the community about our collective disappointment in the failure of the religious establishment to speak openly and honestly about HIV/AIDS, but the media deserves equal amounts of scorn. So much power to educate and inform and advocate, wasted on tidbits and tokens.

Go to next entry: Day 5
Return to homepage: Dispatches from the International AIDS Conference in Mexico
Date published: 08/12/2008