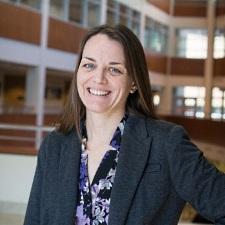 One size doesn’t fit all women in clothing, and neither should all women have mammograms on the same schedule, a new national study concludes.

A large computer modeling study led by Dr. Amy Trentham-Dietz of the University of Wisconsin Carbone Cancer Center found that the majority of women ages 50 to 74 can benefit if they have mammograms every two or three years. These women at average risk can retain most of the benefit of having mammograms less often and greatly reduce the chances of false positive results and unneeded biopsies and overdiagnosis, the study concludes.

The news is different for women with dense breasts and who have a higher risk of breast cancer: The study suggests they should be screened every year because of the higher likelihood that cancer will be present and detected.

What is Dense Breast Tissue?

An exam alone isn't enough to determine the density of breast tissue, and it may change throughout a woman's lifetime. Learn the causes and how you can protect your health

Women with dense breasts are more likely to develop cancer and the density of their tissue can make detection more difficult.

“Our goal was to help provide evidence so that women and their providers can weigh the benefits of screening with their personal risk and preferences,’’ says Trentham-Dietz, who led the study with co-authors Drs. Karla Kerlikowske of the University of California, San Francisco, Natasha Stout of Harvard, Jeanne Mandelblatt of Georgetown University and Anna Tosteson of Dartmouth College. “Tailored screening aimed for those at higher and lower risk for breast cancer is the goal.”

The study was published today in the Annals of Internal Medicine, along with a related editorial saying the results “provide information that the informed patient and clinician can use in making individualized decisions.”

The Danger of False Positives

Researchers from the Breast Cancer Surveillance Consortium (BCSC) and the Cancer Intervention and Surveillance Modeling Network (CISNET) used three well-established models to evaluate outcomes using various screening intervals for digital mammography among subgroups of women based on age, risk, and breast density. The models showed that for the large majority of American women at average risk and with lower breast density, screening every three years (rather than the current two-year interval) could reduce false positives, biopsies, and overdiagnosis with minimal effect on breast-cancer deaths averted.

“We found that, for lower risk women—those with non-dense breasts and minimal risk factors—if you screen more frequently, the benefits are slightly greater but the numbers of false-positives and biopsies increase dramatically,’’ Kerlikowske says. “The majority of American women are at low risk so less frequent screening in those at low risk will reduce the harms of screening.”

On the other hand, the models showed women at higher risk for breast cancer and with dense breasts may reap greater benefit from annual screening. Risk is based on factors such as family history of breast cancer, previous breast biopsies and other factors. Women who want to assess their breast-cancer risk can use the BCSC calculator or others.

Trentham-Dietz says that future studies will look at screening intervals for younger women according to their density and risk level.

This study was funded by the National Cancer Institute. Other University of Wisconsin researchers involved in the study were Mehmet Ali Ergun, Dr. Oguzhan Alagoz, Dr. Ronald Gangnon and John Hampton.

After that, women should decide on screening frequency based on a discussion of risk factors and preferences with their provider. After the first screening, women in their 40s may elect to not be screened with mammography again until age 50, or may consider additional screening every one to two years. Starting at age 50, screening should occur every one to two years, with the frequency based on risk factors and discussion between patient and provider.